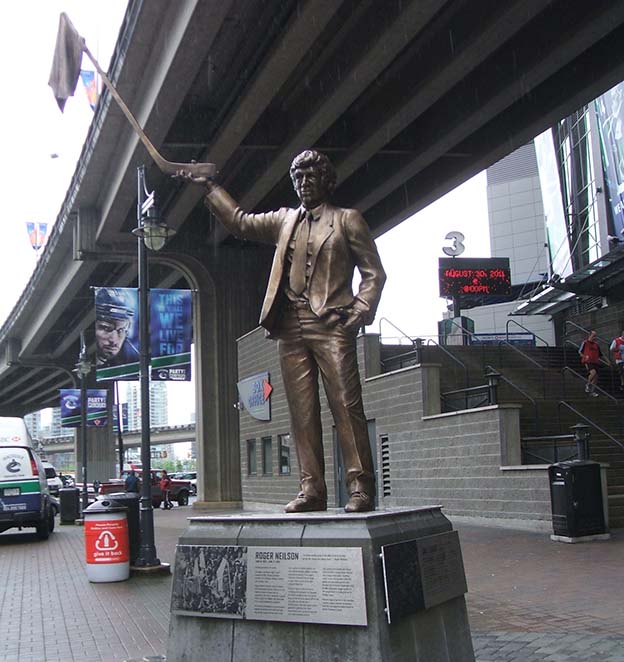 A statue of humanities graduate Roger Neilson holding a hockey stick and white towel outside Vancouver's Rogers Arena. The product of Neilson's frustration with officiating during a 1982 playoff game has become popular not just with other hockey teams, but in other sports.

Hockey fans are filling NHL arenas this week for the first round of the Stanley Cup playoffs. Many will be armed with towels to wave in support of the home team – a 31-year-old tradition started by a McMaster graduate.

In Chicago for game two of the NHL’s 1982 conference finals, humanities alumnus Roger Neilson, then-coach of the Vancouver Canucks, grew tired of what he considered to be poor officiating. In desperation, Neilson put a white towel on the end of a stick and began waving it in mock surrender to referee Bob Myers.

A number of Canucks players followed suit, Neilson and the team were fined, and the tradition known as “Towel Power” was born: towel-waving fans greeted the Canucks at the airport and filled the Pacific Coliseum for the team’s next home game.

The idea has since spread, not only to other hockey teams, but to other sports.

In thirteen years as a head coach, Nielson led his teams to the playoffs eleven times. He was inducted into McMaster’s Alumni Gallery in 2000, and awarded an honorary doctor of laws in 2001.

He died in 2003 after a lengthy battle with cancer.