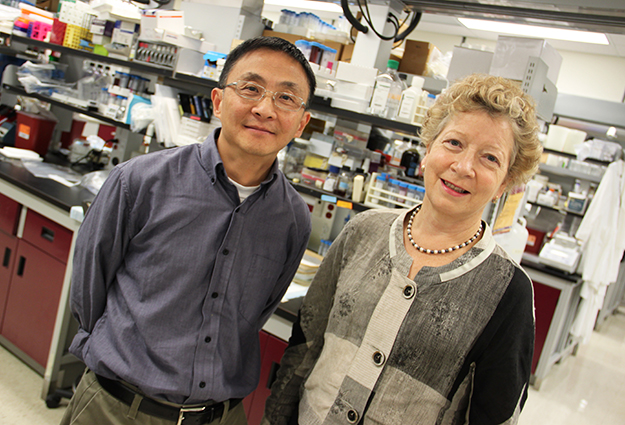 A tuberculosis vaccine developed at the University offers new hope in the global fight against the disease.

“We are the first to have developed such a vaccine for tuberculosis,” said Dr. Fiona Smaill, professor and chair of the Department of Pathology and Molecular Medicine at the Michael G. DeGroote School of Medicine.

Smaill led the phase-one clinical study alongside Zhou Xing, a professor of pathology and molecular medicine at the McMaster Immunology Research Centre. The findings were published Wednesday in the journal Science Translational Medicine. The vaccine, based on a genetically modified cold virus, was developed in Xing’s laboratory.

“Tuberculosis is a serious public health threat,” Smaill said. “One-third of world’s population is infected with the organism that causes tuberculosis, and it remains the top infectious killer of people, only secondary to HIV, yet the current vaccine used to prevent it is ineffective.”

The control of tuberculosis has met with further challenge from high incidence of multi-drug resistant tuberculosis, she added.

The new vaccine was developed to act as a “booster” to Bacille Calmette Guerin (BCG), currently the only tuberculosis vaccine available. BCG was developed in the 1920s and has since been used worldwide. The new vaccine would reactivate immune elements that diminish over time following BCG vaccination.

Currently, the BCG vaccine is part of the World Health Organization’s immunization program in Asia, Africa, Eastern Europe and South America. Nunavut is the only Canadian jurisdiction where the BCG vaccine is routinely administered, due to the high rate of tuberculosis in the territory. It is typically given in the first year of life.

Development of the McMaster vaccine has been more than a decade in the making. After several years of testing, researchers began the first human clinical trial in 2009 with 24 healthy human volunteers, including 12 who were previously BCG-immunized.

“The primary goal was to look at the safety of a single dose vaccine injection, as well as its potency to engage the immune system,” said Xing.

By 2012, the team established that the vaccine was safe, and observed a robust immune response in most trial participants. More clinical trials are needed to measure the vaccine’s real potential, Xing added.

“As a doctor who looks after patients who have tuberculosis, including those who are HIV infected, I realize how important it is going to be to control this infection with a good vaccine,” explained Smaill. “We are probably one of a few groups in the world who are actually doing bench-to-human tuberculosis vaccine work, and we are excited to be part of this and thrilled that it started at McMaster.”

Development of the vaccine was supported by the Canadian Institutes of Health Research, Canadian Foundation for Innovation, World Health Organization, Ontario Ministry of Research and Innovation, McMaster University and the Michael G. DeGroote Institute for Infectious Disease Research.