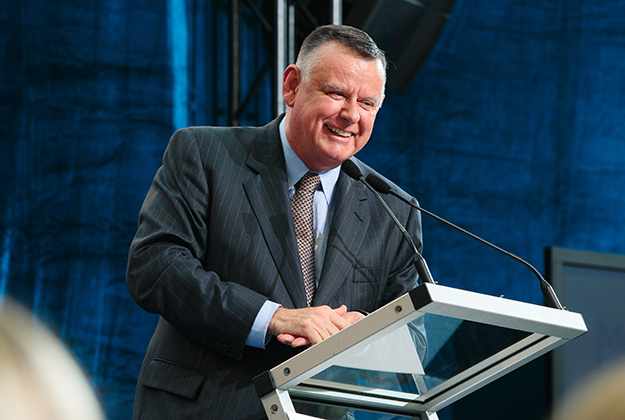 'It was always my vision that McMaster build a downtown health centre accessible to people by bus, car or walking,' said Braley, pictured here at the 2007 announcement of his $50 million gift to McMaster. The David Braley Health Sciences Centre will open May 15.

McMaster’s new building in downtown Hamilton has been named the David Braley Health Sciences Centre, in tribute to the city’s well-known businessman.

University president Patrick Deane made the announcement Thursday, saying the six-storey building at the corner of Main and Bay is a landmark to Braley’s vision of an investment in the future health of Hamiltonians, Ontarians and Canadians and support for the city’s downtown revitalization.

“David Braley is a master builder for our city, with an intense belief in the opportunities for both Hamilton and McMaster, and we’re proud to honour him with the name of the building,” said Deane. “This dream would not have become a reality without his active support.”

Braley’s contribution of $10 million for the new health sciences centre was earmarked in his $50 million gift to McMaster University in 2007. Other funds for the $84.6 million project included $20 million from the City of Hamilton plus other funding from the Province of Ontario and McMaster, its Faculty of Health Sciences and Michael G. DeGroote School of Medicine. The naming has been approved by McMaster’s board of governors.

The 192,000-square-foot building, on the McMaster Health Campus site, will be the home of Hamilton Public Health Services, a large family health clinic and several academic divisions of the Michael G. DeGroote School of Medicine, including the Department of Family Medicine, and programs for continuing health sciences education, faculty development, education research development and the Foundation for Medical Practice Education.

“From the beginning, David Braley has shared our drive to expand the impact of McMaster and the city on innovation in health sciences research, education and care across Canada while, at the same time, increasing health services to the people of Hamilton,” said John Kelton, dean and vice-president of the Faculty of Health Sciences.

“This is a beautiful landmark, a tribute to his visionary leadership.”

David Price, chair of the Department of Family Medicine, added: “This building is unique in its collaboration between primary care and public health. We are so pleased to have it named after David Braley, whose vision and commitment is allowing us to enhance community-based care and, ultimately, to have a positive impact on the overall health of people on a local, national and international scale.”

David Braley said he is delighted with the new building, and the future it promises as a space for innovations in health care.

“It was always my vision that McMaster build a downtown health centre accessible to people by bus, car or walking. I want this health sciences centre to be a place for research and education, and also the place where our citizens will be able to receive great health care.”

“I’m proud to have my name on this building, and I thank McMaster for this tribute.”

The moves of different groups into the building began yesterday. The official opening of the building is Friday, May 15.