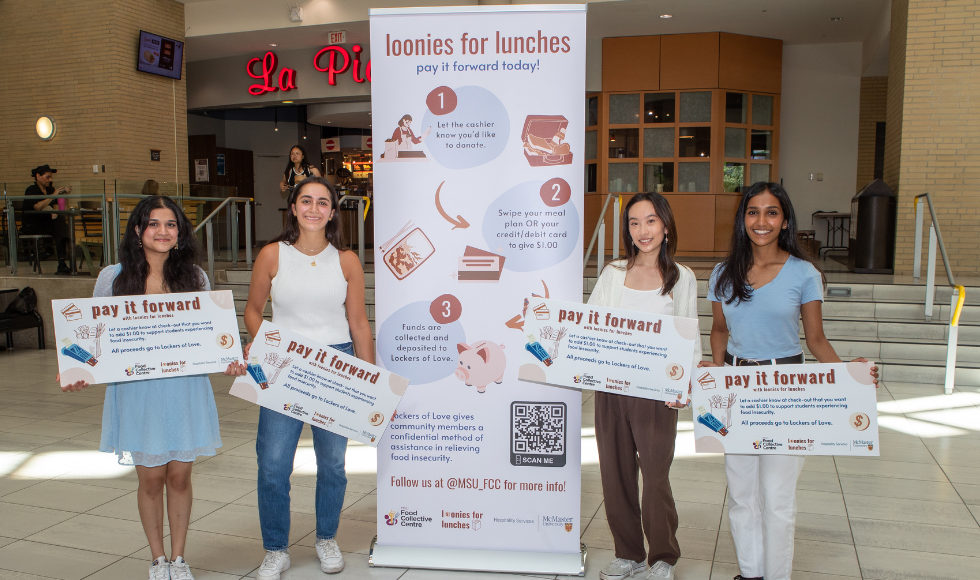 From left, Priyanka Ramchurreetoo, Kimia Kermanchi, Linda Duong, and Angenie Christy Antony are launching Loonies for Lunches. Starting Sept. 6, La Piazza customers can add on a $1 donation to Lockers of Love, an initiative that allows students to anonymously access food.

When four second-year students began researching food insecurity in Hamilton, they became so invested in the subject, they had to take their project out of the classroom.

Launching Tuesday, Sept. 6, Loonies for Lunches offers customers at La Piazza the opportunity to add $1 to their purchase to donate to Lockers of Love, a McMaster Food Collective Centre (FCC) project that enables students to privately access groceries (or funds for groceries) on an as-needed basis.

“We became very passionate about food insecurity, and when we saw the research — including, for instance, that at least 20,000 people access the Hamilton Food Bank each month — we realized the extent of the problem,” says Linda Duong, a second-year Health Sciences student who organized Loonies for Lunches with her classmates.

“Knowing how much established McMaster services are contributing to food security already, we did not want to oversaturate the system. Rather, we looked to figure out how we can make existing services more accessible and known to those who need them instead of creating something new.”

The HTHSCI 1E06—Inquiry I: Introduction course encourages students to take experientially and through open-ended assignments.

Building off a previous McMaster Hospitality Services campaign, the students wanted to find an easier, more accessible way for university community  members to support one another and address address food insecurity on campus.

“We initially began with a more investigative mindset, but once we started learning more and more about food insecurity at McMaster, we felt compelled in our hearts to take all the work that we had done and transform it into something a bit more actionable that could hopefully give back to our community,” says Antony.

With support from Michael Wong, an assistant professor in the department of psychiatry and behavioural neurosciences and the Bachelor of Health Sciences program, the students approached Hospitality Services, the FCC and the McMaster Student Union to pitch their campaign.

“What we liked about Lockers of Love is that it’s anonymous,” explains Kermanchi.

“Food is placed in a locker on campus, and then students are given a code to pick up the items they ordered. Or students can be provided with a gift card that they can use to go grocery shopping, so there’s no need for face-to-face interaction, which can be a big barrier in accessing food banks.”

Beyond learning about food security, the students have also learned from the experience of getting a project like this off the ground.

“I think I’ve learned how large the McMaster community is beyond just my courses, professors, classmates, etc.,” says Ramchurreetoo.

“There are so many more people working behind the scenes at Mac trying to maintain and improve student life than I realized.”

“A key takeaway for me is how open McMaster has been to hearing students’ ideas,” she says.

“Everyone has been so receptive—advocating for us to stay on board and to share our thoughts. We’ve felt like equals throughout.”

Loonies for Lunches will begin at La Piazza on Tuesday; anyone can ask a cashier to add a $1 Lockers of Love donation to their purchase, using meal cards, debit or credit.