New allergy findings are nothin’ to sneeze at 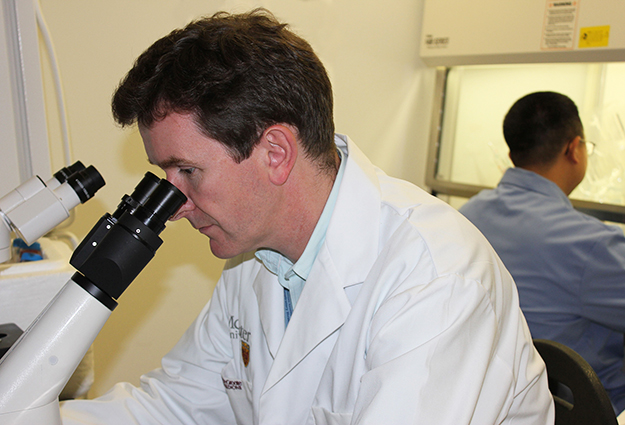 Mark Larché, a professor of medicine at McMaster and a member of the Firestone Institute for Respiratory Health at St. Joseph’s Healthcare, led the development of the new allergy treatments for hay fever and dust mites.

McMaster researchers have successfully tested a pair of treatments for people with allergies to hay fever and dust mites.

The new treatments, known as “Grass-SPIRE” and “HDM-SPIRE,” are part of a new class of therapy called synthetic peptide immuno-regulatory epitopes, or “SPIREs.” Both are expected to be helpful for the millions of people who suffer from sneezing, itchy eyes and runny noses due to grass pollen or tiny dust mites.

It is estimated that, together, these allergens are responsible for more than 50 per cent of allergic respiratory disease.

“This result is an important validation of the approach we are taking to treat allergic diseases,” said Mark Larché, who led the design of the treatments. Larché is a professor of medicine of the Michael G. DeGroote School of Medicine, and member of the Firestone Institute for Respiratory Health at St. Joseph’s Healthcare Hamilton.

“Positive results, first with a cat allergy therapy and now with house dust mite and grass allergy treatments, suggest that this approach may be used for many common allergies.”

The phase-two clinical trial involved 280 grass allergy patients recording their symptoms while exposed to grass pollen in a controlled environment — both before treatment, and at the end of the hay fever season. Study participants received one of three treatment regimens over three months, completed prior to the beginning of the pollen season. Those who had the optimal short course of therapy had significantly improved symptoms at the end of the season, compared to those who had a placebo. This treatment, called “Grass-SPIRE,” was well tolerated.

Between 15 and 25 per cent of the population in North America and Europe is sensitive to pollen from different grass species. One in four people are sensitive to house dust mites, more than any other common allergen, which includes millions of people in these regions.

Dust mites are close relatives of spiders and ticks, and are too small to see without a microscope. They eat skin cells shed by people, and they thrive in warm, humid environments such as upholstered furniture, bedding and carpeting.

Hay fever is a seasonal response to many different grass pollens which are heaviest in the spring and fall.

The studies were conducted by Adiga Life Sciences — a joint venture between McMaster University and Circassia, a U.K. based biotechnology company — and were supported by St. Joseph’s Healthcare Hamilton.