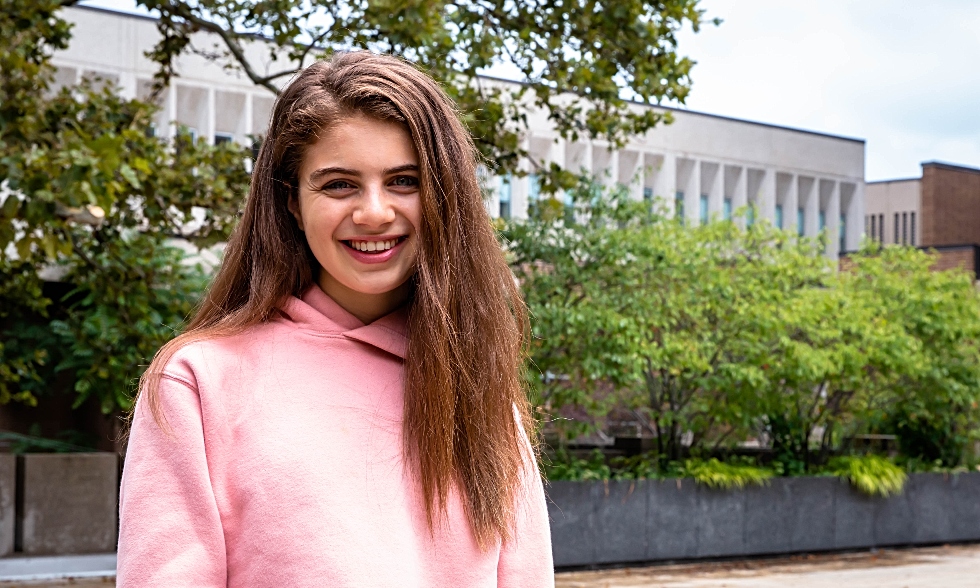 Last year, Tess Schwartz was forced to put university on hold after she was hospitalized with anorexia. Now, one year later, she has regained her health and is starting her first year at McMaster. Schwartz shares her inspiring story and offers hope to those who may be facing a similar struggle.

In 2018, Tess Schwartz learned she had been accepted into McMaster’s Life Sciences program. An exceptional student with dreams of one day attending medical school, she looked forward to starting her first year at McMaster.

But last summer, just weeks before the beginning of the school year, Schwartz was forced to put university on hold after she was hospitalized with anorexia– an eating disorder she developed in her final year of high school and which very nearly claimed her life.

Over the past year, with the support of her family and her medical team, Schwartz has worked hard to regain her health and, last week, began her first year at McMaster – an important milestone in her remarkable journey.

Schwartz shares her inspiring story of recovery and offers hope to others who may be facing a similar struggle:

Throughout high school, I was a relatively happy person – I had good friends, I was in extracurricular activities, achieved high grades and, most importantly, I was healthy.

In March 2018, I decided to go on a “health kick.” It started off as a harmless routine of eating healthier and going to the gym every day. I was able to see the results of my work quickly, which made me feel more confident in myself.

But as months went on, I found myself obsessing about what I was eating and how often I was working out and, as that became first priority, I put other aspects of my life that were once important (like studying and attending extracurricular activities) on the back-burner. That’s when I noticed that my harmless “health kick” was now a very dangerous eating disorder.

The weird thing about having an eating disorder was that the more results I saw, the less satisfied I was with my body. My friends and family started to notice that I was changing, not only in my appearance, but in my attitude towards school and the other things that once mattered to me.

They encouraged me to start eating more and working out less, but I was stubborn and didn’t listen.

In July 2018, my parents became extremely worried about me and took me to the doctor who ordered an electrocardiogram (ECG). The ECG showed that my heart was functioning way below normal – around 40 beats per minute (BPM). When my doctor told me these results, she  said that if I carried on, I would die within the next few months.

That same day, despite my protestation, I was admitted on an involuntary hold to SickKids Hospital, where I was about to embark on a very long and arduous fight for my life.

My stay at the hospital was extremely difficult for me. I had to abide by the hospital ward’s very strict policies, which consisted of not moving around, going to sleep no later than 10:00 p.m., and following a very rigid meal plan. On top of that, I was also attached to a heart monitor, which would beep on and off every time my heart rate dipped – a stressful situation that made for some sleepless nights!

While living in the hospital was both scary and tedious, it was also a good learning experience. I got to see how doctors interacted both with me and with the other patients around me. I paid close attention to how the doctors treated their patients and the patient’s families – some doctors had an amazing bedside manner, which set a example for how doctors should treat their patients, other doctors were great examples of how not to treat patients.

Observing my medical team’s behavior was important to me. As an aspiring future physician, I want to know how to support my future patients as best I can and make them feel as comfortable as possible because I know from personal experience how important it is.

In late August 2018, I knew I would not be able to attend McMaster in September. It was devastating to come to terms with this, because I was really looking forward to starting university.

Even so, I wanted to find a way to keep up my studies and, during my last few weeks in the hospital, I was able to take some online transfer credits that would count towards my degree at McMaster. Taking online courses was great for me; not only did it keep me busy, it also made me feel better knowing that I was able to continue my education even though I wouldn’t be attending McMaster that year.

After six long weeks in hospital, I was finally allowed to go home on September 15, 2018. I took the rest of the year to work, continue my online courses, and most importantly, to recover.

Taking the rest of the year off was the best decision I could have made for myself, because it gave me time to return to a healthy state. But even though I am physically healthy, I want to make it clear that my recovery story still isn’t over. I have to make a conscious effort to continually remind myself that the only way to stay healthy is to eat regularly and exercise in moderation.

If I were to offer one piece of advice to anyone who thinks they might be in the beginning stages of an eating disorder, it would be to talk to someone they trust about what they’re going through, because I know from personal experience that with the help of a good support team, recovery is one hundred per cent possible!

To learn more about medical services, wellness programs and counselling options on campus, check out the articles and resources offered through the Student Wellness Centre.