On the crest of the wave: McMaster at the forefront of global water research 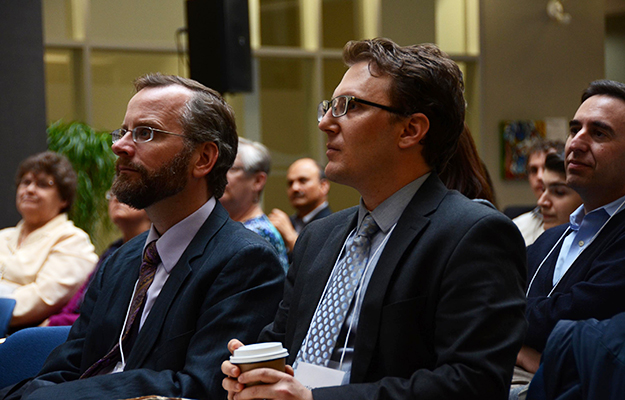 Dustin Garrick (centre), assistant professor in the Faculties of Social Sciences and Engineering and Philomathia Chair of Water Policy, was a driving force behind Tuesday's Philomathia Water Forum at McMaster Innovation Park.

By the year 2050, Earth will be home to roughly 10 billion people. Each and every one of those people will require freshwater to survive, yet the world’s finite supply is expected to become increasingly scarce.

In some corners of the globe, it’s already happening.

For the past six months, Australia has been plagued by wild brush fires scarring large swaths of dry land. In March, California governor Jerry Brown declared a state of emergency as residents braced for a prolonged water shortage. Just this week, the United Nations has warned that a looming drought in Syria could lead to a record-low wheat harvest, putting millions at risk of starvation.

On Tuesday, some of the country’s top scientific minds gathered at McMaster Innovation Park to address these issues and more at the Philomathia Water Forum: 21st Century Water Security Challenges for Society and Science.

The forum also served as a launch event for a new interdisciplinary research network at McMaster, aiming to tackle some of the world’s most pressing water-related issues. Dustin Garrick, assistant professor in the Faculties of Social Sciences and Engineering and McMaster’s Philomathia Chair of Water Policy, is leading the charge.

“There are several mega-trends in society related to population growth, urbanization and climate change which make managing existing water more challenging,” Garrick told RCI’s Marc Montgomery ahead of Tuesday’s event. “The issue is how to manage that small amount of water that is available as freshwater, for society and society’s evolving needs.

Read the full story and listen to a live interview with Garrick on RCI.