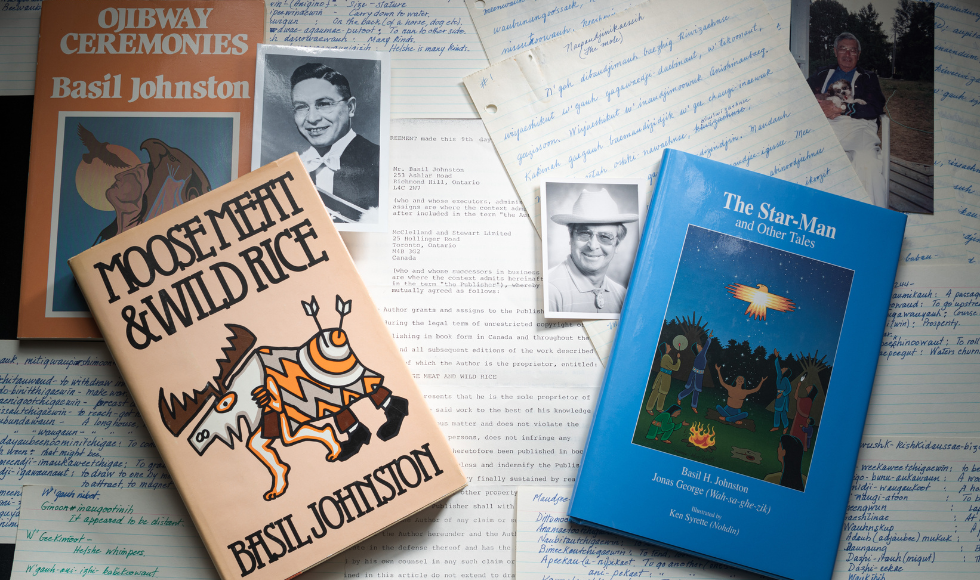 A selection of materials from the Basil Johnston Archives.

The Basil H. Johnston Archives at McMaster University are now part of the Canadian Commission for UNESCO Canada Memory of the World Register.

Johnston (1929-2015) was an Anishinaabe (Ojibwe) author, linguist and teacher. Widely considered one of the leading North American Indigenous authors of the 20th century, he wrote about Anishinaabe traditions, language and modern life.

The Canada Memory of the World Register, created in 2017, promotes the diversity of the country’s significant documentary heritage, which extends from the initial settling of the land by Indigenous Peoples up to the present time.

“The addition of the Basil H. Johnston Archives to the Canada Memory of the World Register is a deserving recognition of his remarkable contributions, and also celebrates the dedication of McMaster’s archives and research collections team in ensuring archives of Indigenous Canadians are preserved and accessible to the public,” said Vivian Lewis, McMaster University Librarian.

The personal archives of Johnston comprise his writings and translations, published and unpublished manuscripts, works of fiction, poetry, plays and works of non-fiction.

Also included in this rich archive are materials related to Johnston’s experiences in the Indian Residential School system, along with his research files on Indigenous land claims.

These textual materials are supplemented by photographs and sound recordings, including recordings of Basil Johnston narrating traditional Ojibwe stories.

The archives pertain intimately to the places that shaped his life, especially the communities of Wasauksing and Neyaashiinigmiing (Chippewas of Nawash Unceded First Nation) where he learned the Ojibwe language and stories that became his life’s work.

“Because the Basil H. Johnston Archives chronicle so many creation stories and place-names of the Anishinaabe peoples, they are also, in a sense, a testament to the broad human geography of Anishinaabemowin speakers — stretching from Quebec to the Great Plains,” said Myron Groover, McMaster archivist and rare books librarian.

Johnston’s life passion was sharing, recording and teaching Anishinaabe culture and language. He was the author of 25 books in English and five in Anishinaabemowin. He created audio programs to teach Anishinaabemowin, wrote in popular newspapers and periodicals and had a career as an Anishinaabemowin storyteller and teacher at the Royal Ontario Museum.

“Basil Johnston’s contributions to the preservation of Anishinaabe history, culture and language in southern Ontario are hugely significant,” said Rick Monture, associate professor in the department of English and Cultural Studies and a member of the McMaster Indigenous Research Institute. “He was a tireless educator and promoter of Indigenous thought and intellectual tradition.

“His archive is a real gift for Indigenous scholars and community researchers who will be able to engage with his work and add to the legacy of his vision for a strong, vibrant presence of Indigenous teaching and learning in this country for decades to come.”

Johnston, recognized as an Elder and Knowledge Keeper within his nation and community, was personally involved with articulating the protocols which regulate access to the archival material. The collection will be used to support Indigenous studies at McMaster and beyond.

The archive is housed at the William Ready Division of Archives and Research Collections at McMaster University Library.

“These records are a direct testament to an extraordinary life which reflects back the worst and best Canada, as a place and as an idea, has contributed to the world,” said Groover, who carefully prepared the nomination for Johnston’s archives to be considered for the Register. “They tell a story of erudition, resilience, weariness, hope, and good humour. The archives are a meaningful and essential addition to the UNESCO Canada Memory of the World Register.”

Cody Groat, chair of the Canadian Advisory Committee for Memory of the World, says Johnston was an innovator in the preservation of Anishinaabemowin.

“The Canadian Commission for UNESCO and the Memory of the World Advisory Committee are honoured to recognize the national significance of this collection that challenged the ideologies of cultural assimilation upheld by the Indian Residential School System, especially within the context of the United Nations International Decade of Indigenous Languages,” Groat said.

For more information about the Basil H. Johnston Archives at McMaster, visit the archives and research collections website or send an email to archives@mcmaster.ca.

Visit the Canada Memory of the World Register for a complete list of collections.