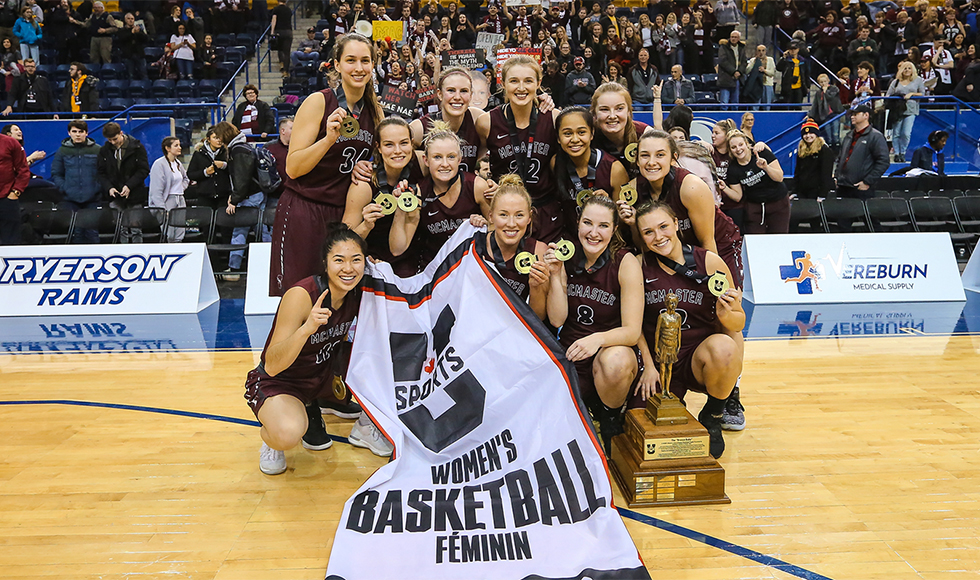 McMaster claimed the first women’s basketball title in its history in its first trip to the final. Photo by: Alex D’Addese.

BY Fraser Caldwell, Athletics and Recreation

Locked in a defensive struggle for three quarters, the Marauders found a new gear and the path to the history books in the fourth.

Second-seeded McMaster broke open a 44-44 tie with the top-seeded Laval Rouge et Or with a 26-point fourth quarter effort, racing to a 70-58 win in the U SPORTS final Sunday to claim the first title in the Marauders history.

McMaster did so in its first trip to the national title game, having won through the semifinal stage for the first time a day earlier against the Saskatchewan Huskies.

“We believed we could do it,” said McMaster head coach Theresa Burns of the win. “It’s been the mindset all year. Then, as the year went on and we continued to build, we got better as it went.”

Answering a Rouge et Or run, which cut their lead to just one midway through the fourth, the Marauders pieced together an 11-2 sequence of their own that Linnaea Harper capped with an off-balance, left-handed bank shot to put the game beyond reach at 64-54 with less than a minute and a half to play.

It's the loopy, off-balance bank shot heard ROUND THE WORLD!

“Everything has lined up so perfectly, like that Hail Mary that I threw up that just happened to go in,” said Harper of her team’s championship run. “You have to keep shooting, even when sometimes they’re not dropping. Eventually they get there, and tonight they did.”

Harper was named as the tournament’s Most Valuable Player, while forward Christina Buttenham was McMaster’s Player of the Game from the championship game and also cracked the all-star team.