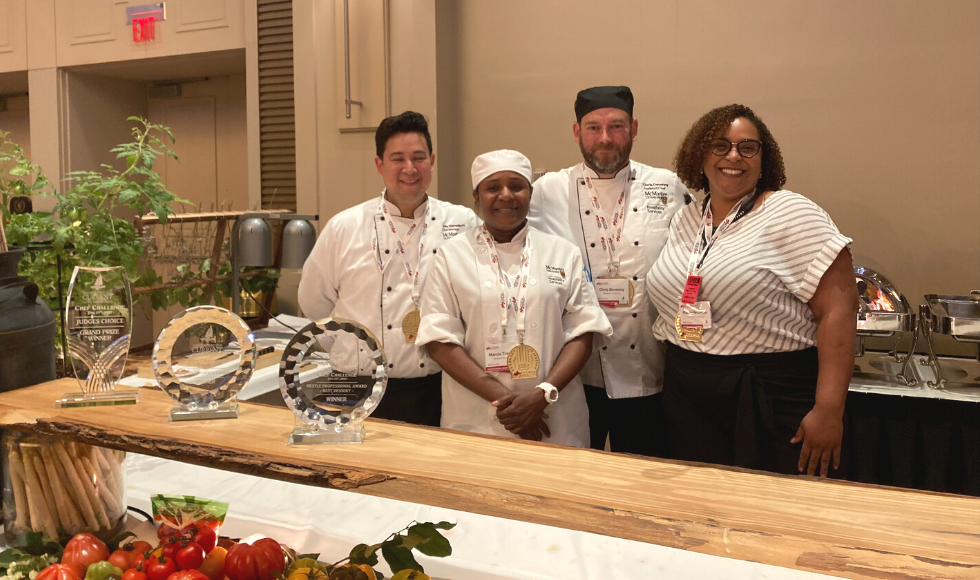 Cooking competitions on television may make it seem like chefs can prepare a culinary masterpiece in short order but, as Marcia Traynor found out, way more goes on behind the scenes than most of us would think.

Traynor was part of the culinary team representing McMaster Hospitality Services in the Canadian College and University Food Service Association (CCUFSA) conference’s annual culinary challenge in June. The team, led by Hospitality Services’ Chef John Barreda, won all available three gold medals— a record for any school participating in the past. Chef Barreda was joined by Assistant Chef Chris Devenney, Rochelle Dixon, and Traynor, an apprentice working in LaPiazza.

The competition is a full-day event. Three teams from competing universities and colleges prepare a three-course meal for a panel of judges who assess the meal based on complexity, presentation and theme choice. The McMaster team prepared for the competition for over a month in advance, planning and testing their menu options. This year the judges included celebrity judge Chef Mark McEwan of Top Chef Canada and Wall of Chefs.

This year’s win was extra special — this was the first time an apprentice has participated in the competition, and Traynor felt both excited and nervous to join the team.

“I was so happy to participate, but I also really wanted to win,” says Traynor.

“When I saw the menu, I got a little nervous. It was ambitious and took a lot of planning and preparation. But everyone was encouraging and made me feel part of the team, even though I was working behind the scenes.”

For Traynor, who has had a passion for cooking since she was a nine-year-old girl living in Jamaica, the win was extra special — Traynor is the first apprentice to participate in the competition.

Traynor is part of a program created by McMaster Hospitality Services that provides McMaster Food Service employees with the opportunity to attend a culinary school and complete the apprenticeship portions of their program by working at McMaster so they can continue receiving their wages and benefits.

“I am so proud of this team and all the work they had to do to win,” says Chris Roberts, director of Hospitality Services at McMaster.

“It’s competitions like this that help maintain our high culinary reputation, and this team just excelled in all aspects of the competition. I’m particularly proud because I believe we are the only team who has ever included an apprentice, and Marcia rose to the challenge.”

Traynor decided to pursue her passion for cooking when she immigrated to Canada from Jamaica in 2016. While it was challenging to figure out a clear career path to becoming a chef when she started working at McMaster, she learned about the apprenticeship program and enrolled at Niagara College’s Culinary Institute in 2019.

“When I came to Canada, I decided that I wanted to do something I loved, and I’ve had a passion for cooking since I was nine years old,” says Traynor.

“Joining this program has been an amazing opportunity for me. I can earn money while learning and everyone at McMaster has been very supportive.”

Traynor’s experience at CCUFSA has also shown her how enrolling in competitions can help her sharpen her skills and broaden her experience. She has ambitions now that she may not have had before joining the team.

“I told Mark McEwan that the next time he sees me will be on his cooking show Wall of Chefs,’’ she laughs. She then turns reflective and says, “I want to thank Chef John, Chef Chris and everyone involved — winning those gold medals was an amazing experience that I will never forget.