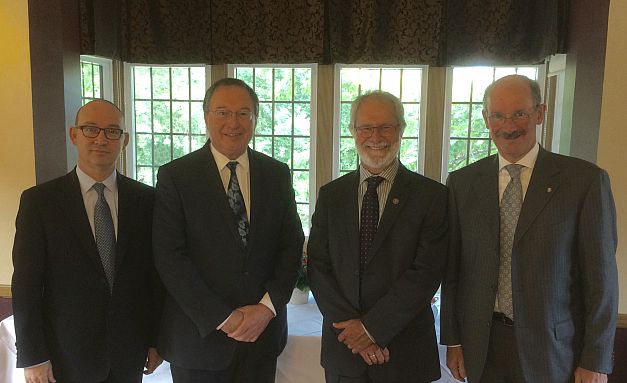 McMaster continues to work toward developing strategic research connections between the University and Israel.

Rafael Barak, Ambassador of Israel to Canada and DJ Schneeweiss, Israeli Consul General to Toronto and Western Canada, recently spent the day at McMaster, meeting with University leaders to discuss ways to create deeper research and academic collaborations between McMaster and some of Israel’s leading post-secondary institutions.

“As one of the world’s top universities, McMaster seeks to engage with leading institutions across the globe. We want to build these relationships by creating opportunities to develop research partnerships in key areas,” says Peter Mascher Associate Vice President, International, who hosted the Israeli delegation. “We were pleased to welcome Ambassador Barak and Consul General Schneeweiss to McMaster and look forward to exploring meaningful research collaborations that will benefit both McMaster and Israeli institutions.”

As a next step, a joint workshop will be held in the coming months aimed at connecting McMaster and Israeli researchers in the area of neuroscience, a demonstrated strength at both McMaster and several Israeli institutions.

Mascher says the goal of the workshop will be to provide an opportunity for key McMaster faculty members to meet face-to-face with Israeli researchers, share their research, identify areas of common interest and pursue projects that make sense for the individual researchers and institutions involved.

The groundwork for McMaster-Israeli academic and research collaboration was laid last December when Mascher represented McMaster as part of a U15 delegation to Israel.

Read more about McMaster’s participation in the U15 Group of Canadian Universities visit to Israel.