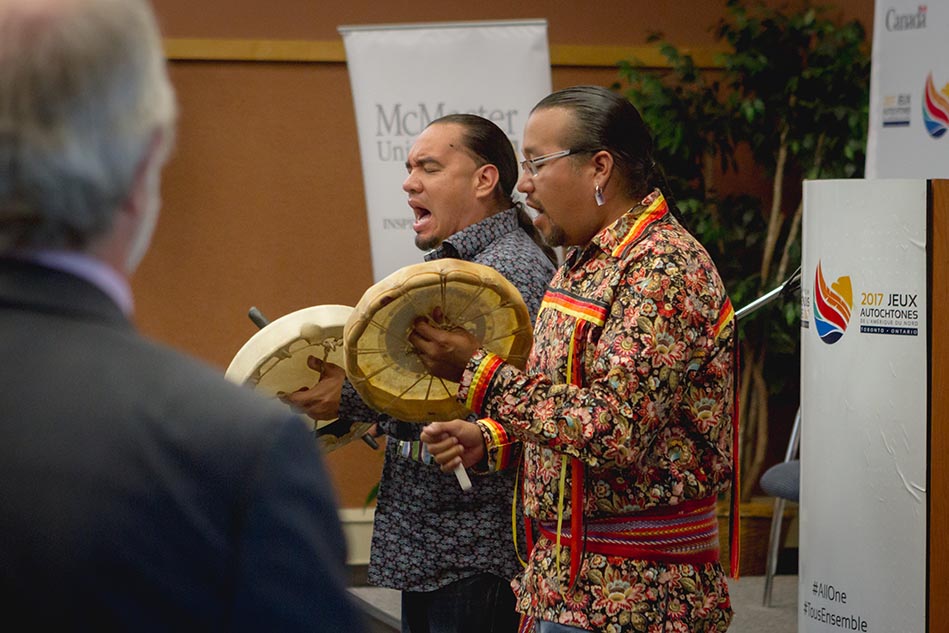 McMaster is joining the rest of the country June 21 in celebrating the heritage, diverse cultures and outstanding achievements of First Nations, Inuit and Métis peoples.

McMaster will host soccer games and more than 1,800 participants as part of the Toronto 2017 North American Indigenous Games.

The Games Host Society was on campus Thursday to announce a partnership with McMaster as well as the City of Hamilton and Tourism Hamilton that will see four sports played in the city, including soccer at Ron Joyce Stadium.

In addition to the sport venues, McMaster will also house more than 1,800 participants on campus with the creation of an Athletes Village.

The Games will provide Indigenous youth the opportunity to showcase their athletic achievements and cultural heritage, in Canada’s largest city and surrounding regions, under a significant international spotlight.

The City of Hamilton and McMaster University have a tradition of excellence hosting major sporting events. Both entities were significant players in staging soccer during the 2015 Toronto Pan Am and Parapan Am Games.

The four sport competitions to be held in the Greater Hamilton Area include:

The Games provide Indigenous youth, aged 13-19, an opportunity to showcase their athletic abilities through 14 sports and celebrate their heritage through numerous cultural events. More than 5,000 athletes and 2,000 volunteers will take part in the Toronto 2017 NAIG.

The significance of #Team88 is in reference to The Truth and Reconciliation Commission Report Call to Action 88: “We call upon all levels of government to take action to ensure long-term Aboriginal athlete development and growth, and continued support for the North American Indigenous Games, including funding to host the games and for provincial and territorial team preparation and travel.”

In Nitewaké:non, artist Melissa General examines her Indigenous identity and the longing she feels to return home.