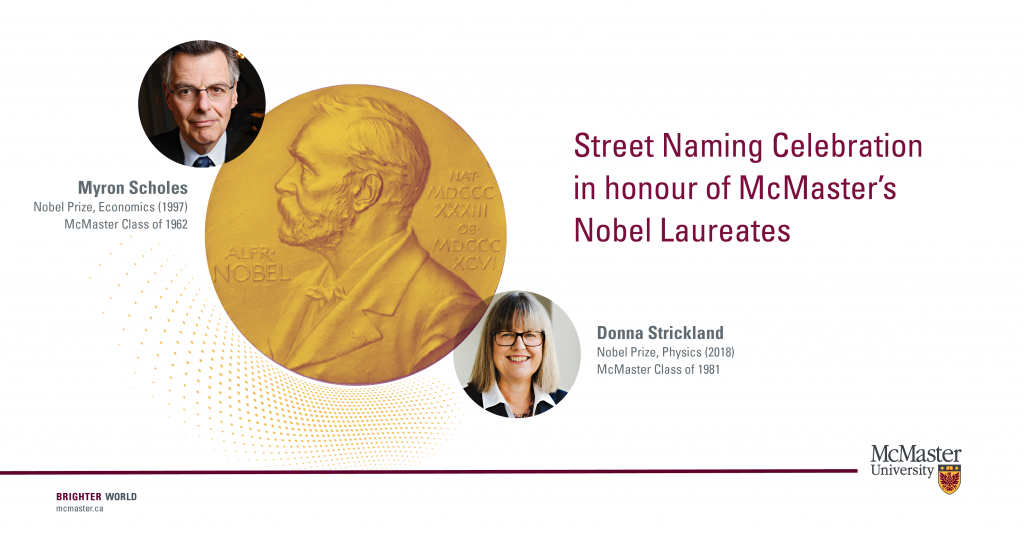 The names of McMaster alumni and Nobel laureates Myron Scholes and Donna Strickland will become permanent fixtures on campus.

Nobel laureates and McMaster alumni Myron Scholes and Donna Strickland will be honoured at a special street naming ceremony set to coincide with the week when this year’s Nobel Prize recipients are announced.

A portion of Stearn Drive, the roadway that runs across the south side of the David Braley Athletic Centre, will be named Scholes Way, and a stretch of road near the Arthur N. Bourns Building and John Hodgins Engineering Building will be named Strickland Way.

Each location will also have a plaque installed nearby that will detail the storied accomplishments of Scholes and Strickland.

“This celebration gives us the chance to honour the work of two extraordinary McMaster graduates who revolutionized their fields of study,” says President and Vice-Chancellor David Farrar.

“The legacy of our Nobel laureates will be forever preserved on our campus as a reminder of the kind of excellence that McMaster fosters and the immense impact we have on the world around us.”

As part of the day’s festivities, Strickland will be on campus to meet with students and take part in a variety of events, including a fireside chat in the afternoon with student leaders that is open to members of the McMaster community.

Throughout the day, Strickland will also be meeting with current Engineering Physics students and faculty members to discuss, among other things, women in STEM, resiliency in academic pursuits and future career paths.

In 1962, Scholes graduated with a bachelor’s degree in economics from McMaster University. He later met fellow economist Fischer Black while working at MIT and, together, the two scholars devised the Black-Scholes equation, a mathematical model to determine the value of derivatives that revolutionized the field of options trading. Scholes was awarded the Nobel Prize in economics for this equation in 1997.

“Myron Scholes has had an enormous influence on economics and McMaster’s Economics department is proud to count him among our graduates,” says Faculty of Social Sciences Dean and economics professor Jerry Hurley. “We are delighted to have the opportunity to honour him and highlight his ground-breaking work on economic modelling that still influences the field to this day.”

In 1981, Strickland graduated with a bachelor’s degree in engineering physics from McMaster’s Faculty of Engineering. Strickland completed her doctoral work at the University of Rochester where, under the supervision of Gérard Mourou, she co-developed chirped pulse amplification, a ground-breaking discovery that has gone on to have far-ranging applications in a number of fields, including corrective eye surgery. Strickland and Mourou were awarded the Nobel Prize in physics in 2018.

“Donna Strickland is an incredibly inspiring figure for our McMaster Engineering community,” says Faculty of Engineering Dean Heather Sheardown. “We’re excited to honour her and her pioneering photonics research that has led to broad industrial and medical applications.”

In 2005, a roadway on campus was named Brockhouse Way to honour the world-renowned work of McMaster nuclear physicist and 1994 Nobel laureate Bertram Brockhouse.

In addition to Scholes, Strickland and Brockhouse, Faculty of Health Sciences graduate James Orbinski also accepted the Nobel Peace Prize in 1999 on behalf of Médecins Sans Frontières while serving as international president of the organization.

Stay tuned for an Instagram contest from McMaster Engineering that gives you the opportunity to ask Strickland a question at the event. Follow @mcmastereng for more details.