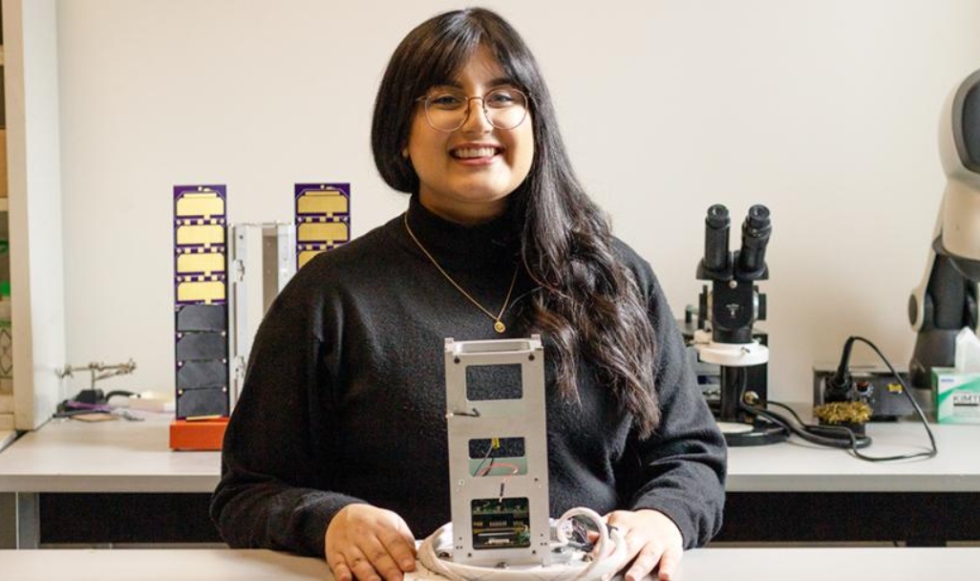 Hira Nadeem’s goal as an emerging aerospace engineer is simple: to “bring space down to earth.”

In her final year of electrical engineering at McMaster University, she’s now one step closer to making her mark in the aerospace industry as a Brooke Owens Fellow.

The fellowship recognizes 40 exceptional women and gender minorities in aerospace each year for their talent, competency, commitment to service and creativity, helping them grow into leaders in the field.

Nadeem is the first Canadian student awarded the fellowship since it began in 2017.

“My passion for space runs deep, and I believe in making space accessible for people,” she said. “People always ask, ‘what’s the point of space exploration when we have so many problems on earth?’ and I tell them that space exploration actually helps us find solutions to improve life on earth.”

Communication technologies first created because people wanted to go to the moon and beyond, for example, have been repurposed for earth. Nadeem says she hopes to continue using space exploration discoveries to make the world a better place.

As a Brooke Owens Fellow, Nadeem will begin a 12-week internship in June 2020 working with satellites for earth observation at Planet Labs‘ San Francisco office. Planet Labs is known for having the most cube satellites in space.

“A year ago, I was working at a power company and didn’t even know I could be in aerospace,” she said, speaking to the aerospace industry in Canada being smaller, with fewer women. “With this opportunity, I gain a class of other women in the field who support one another, and a network of amazing people who hold leadership positions in some of the world’s major aerospace companies.”

She says she strives to encourage other women in engineering to reach outside their comfort zone.

“I really believe that as a woman, it’s not that we can’t do things or that the opportunities don’t exist – sometimes it’s the encouragement that we need,” Nadeem said. “Just go for it and ignore that pessimistic part of your brain that says you can’t do it. If it feels uncomfortable but you’re also excited, just do it.”

Among her many achievements, Nadeem is the operations and co-project manager for McMaster Neudose, the satellite team part of the Canadian CubeSat Project funded by the Canadian Space Agency. In 2022, the team will join 15 other Canadian schools in launching a satellite to space.

She serves as president of the Students for the Exploration and Development of Space Canada (SEDS), a non-for-profit organization aimed at amplifying the student voice in the space community, and is also the founder of the McMaster Planetary Society, a student club focused on space outreach.

In her spare time, Nadeem enjoys exploring her creative side by writing slam poetry, making art and taking photos of the night sky.

“Having confidence has been a work in progress for me, but I know the ripples from meeting the other fellows and doing this internship will be really rewarding and I’m excited for that,” Nadeem said.

Four individuals and one group have received the President’s Award for Outstanding Contributions to Teaching and Learning.