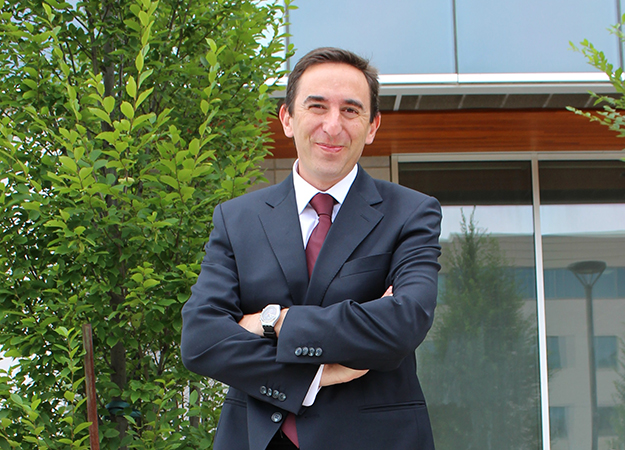 'If you can help a single person, that really makes research worthwhile,' said Carlos Filipe, a professor in McMaster's Department of Chemical Engineering.

An idea inspired by an everyday item from the variety store and developed at McMaster could be on its way to saving the lives of the world’s most vulnerable people.

Grand Challenges Canada, a federally-funded program that aims to improve maternal and child health in developing countries and around the world, has announced that it will fund a project that could make vaccines for deadly illnesses much more affordable and available by adapting already proven technology to a new and vital use.

Lack of access to safe vaccines in resource-poor areas contributes to 2.5 million deaths each year.

Grand Challenges Canada has announced the McMaster project, to be led by Carlos Filipe in Chemical Engineering and Ali Ashkar of the McMaster Immunology Research Centre, as one of eight Canadian initiatives that will receive funding, together with several projects that will originate in developing countries.

Filipe explains that his group will be using technology that McMaster’s Biointerfaces Institute first revealed earlier this year.

Using an idea from Chemical Engineering PhD student Sana Jahanshahi-Anbuhi, the group first developed a way to store fragile biologics at room temperature by embedding them in the same kind of dissolvable gel used in Listerine breath strips, which provides a protective barrier.

In that first project, the team was able to store fragile enzymes and other agents in tiny pills that enable easy, cheap and immediate water testing in the field. The process replaces cumbersome, slow and expensive lab tests.

The team that developed the water-testing pill realized the technology could be used in many more applications, including vaccines, and the Grand Challenges support will allow McMaster researchers to test the same idea with vaccines for diseases such as diphtheria, tetanus and measles.

“It’s the same recipe,” said Filipe. “I think it’s within our grasp, at least for some vaccines.”

Today, such vaccines require refrigeration, making them expensive to store and transport, often putting them out of reach of people in developing countries.

If successful, the result would be vaccines that can be transported and stored virtually anywhere, at low cost, and reconstituted on site using sterile water.

“If you can help a single person,” said Filipe, “that really makes research worthwhile.”

Earlier this year, Carlos Filipe was part of a team that solved the problem of cumbersome, expensive and painfully slow water-testing by turning the process upside-down.

Instead of shipping water to the lab, they have created a way to take the lab to the water, putting potentially life-saving technology into the hands of everyday people.