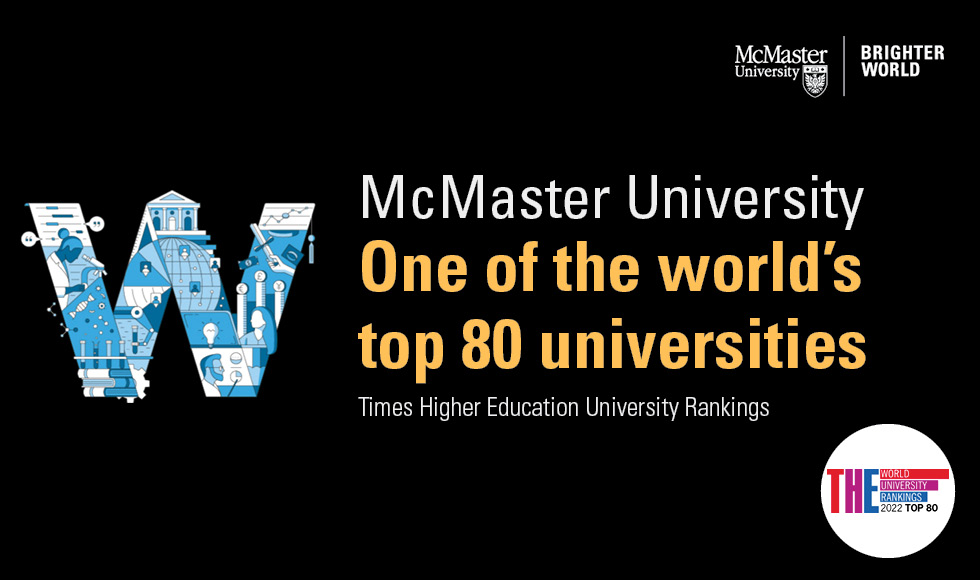 McMaster has been named among the world’s top 100 universities for the fifth year in a row, according to a key international ranking that spans more than 1,600 institutions worldwide.

The university is ranked 80th in the 2022 Times Higher Education rankings released today, one of only four Canadian universities in the world’s top 80.

“At McMaster, our mission has always been to bring together the brightest minds to create a sustainable, healthy world, which has been more important than ever during the global COVID-19 pandemic,” says David Farrar, McMaster’s president.

“Our strong foundation in teaching and research excellence, which is rooted in collaboration and creative problem-solving, is testament to our ongoing place in the top 100.”

McMaster ranked first in Canada and 31st in the world for Industry Income which according to Times Higher Education, “indicates the commercial impact of an institution’s research, which is itself a reflection of the industrial value of the research.”

“This ranking is a reflection of our reputation as a trusted and valued partner with industries large and small; domestic and multi-national,” said Karen Mossman, vice-president, Research. “As Canada’s most research-intensive university, our researchers continue to solve real-world challenges to advance the social and economic impact of our communities.”

McMaster was top-ranked in Canada in the area of citation impact.

This year’s Times Higher Education World Ranking measured the performance of 1,662 universities from 99 countries using a number of performance indicators in the areas of teaching, research, citations, reputation, international outlook and industry income.

Described as a forward-looking financial plan, the budget is the result of a strong collaborative effort supported by faculties and areas across the university.