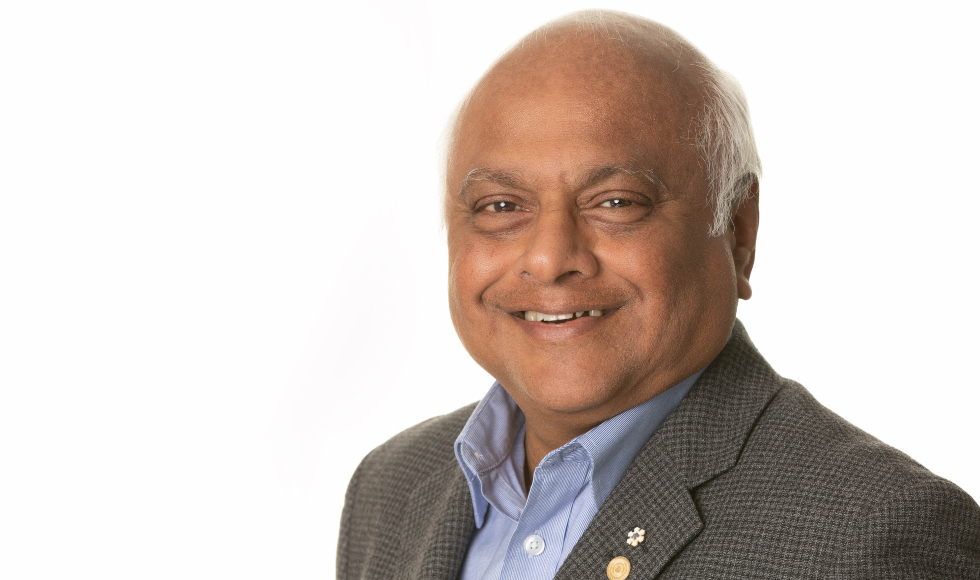 Salim Yusuf is a Distinguished University Professor of medicine in the Michael G. DeGroote School of Medicine at McMaster.

McMaster University professor and scientist Salim Yusuf is the 2020 recipient of the prestigious McLaughlin Medal from the Royal Society of Canada.

A Distinguished University Professor of medicine in the Michael G. DeGroote School of Medicine, he is the first McMaster faculty member to receive the honour which celebrates “important research of sustained excellence in any branch of medical sciences.”

“I am indeed honoured and humbled to receive this prestigious recognition,” said Yusuf.

“I am pleased to be part of a wonderful and committed team at the Population Health Research Institute, McMaster University and Hamilton Health Sciences and the few hundred extraordinary collaborating scientists in many countries. This team has collectively made important contributions that have made a difference to preventing and treating cardiovascular and other diseases in Canada and around the world.”

Yusuf is an internationally renowned cardiologist and epidemiologist whose work over 40 years has influenced the prevention and treatment of cardiovascular disease around the globe.

He came to McMaster in 1992, where he quickly established an international program of research in cardiovascular diseases and prevention. He is also the founder and executive director of the Population Health Research Institute (PHRI) which is ranked among the top three research institutes in Canada.

He was first elected as a Fellow to the Royal Society of Canada in 2005. At that time, the Royal Society cited his many landmark studies around the world that have helped identify new preventive and treatment strategies for cardiovascular diseases, as factors for his selection to the society.

Mark Crowther, chair and professor of medicine at McMaster, said Yusuf is a worthy recipient of the McLaughlin Medal.

“Dr. Yusuf is the preeminent cardiovascular researcher in Canada, and perhaps the world, and is truly deserving of this honour,” said Crowther, a Fellow of the Royal Society of Canada. “Not only has Dr. Yusuf undertaken practice-changing studies, but his work has touched the lives of millions, perhaps billions, of people around the world who have, or who are at risk of, cardiovascular disease.”

Yusuf was born in India and took his medical training at St. John’s Medical College, Bangalore. A Rhodes Scholar, he obtained a DPhil from the University of Oxford and during that time he and his colleagues initiated the concepts of large, simple trials, and meta-analysis.

Yusuf currently leads several major global studies involving more than 100 countries around the world aimed at enhancing knowledge about the biological, behavioural and societal causes, consequences, and approaches to the control of heart diseases, and strokes.

He has published more than 1,200 articles in refereed journals, authored 75 chapters in textbooks, and delivered more than 400 invited lectures and presentations.

He is also committed to training the next generation of researchers. During his term as the president of the World Heart Federation, he established the emerging leaders program, now named after him, which trains 30 mid-career investigators each year from around the world.

In addition to the McLaughlin Medal, Yusuf’s work has garnered numerous accolades, among which are an appointment as an Officer of the Order of Canada, the Canada Gairdner Wightman Award, and an induction in the Canadian Medical Hall of Fame.

Paul O’Byrne, dean and vice-president of the Faculty of Health Sciences, and a Fellow of the Royal Society of Canada, said, “Dr. Salim Yusuf is a brilliant world-class researcher who has built a powerhouse institute tackling global health issues, and producing gold-standard research that both explains the depth of problems across the world and proposes practical responses. The McLaughlin Medal from the Royal Society of Canada is a well-deserved recognition of his excellence.”