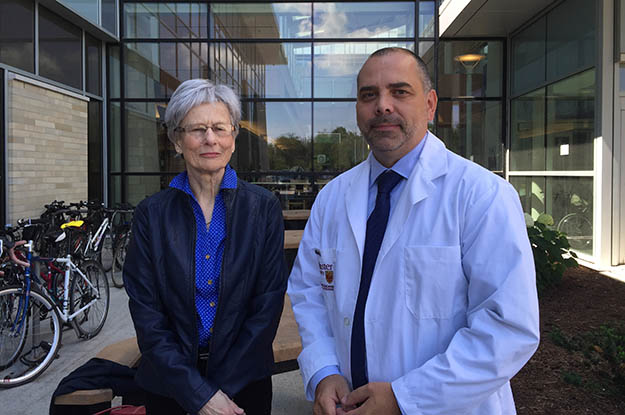 McMaster researcher Brian Lichty with Christina Monker, 75, a former nurse from Rockland, Ontario, and one of the first patients treated in the trial.

Scientists at McMaster are partners in the launch, announced Friday, of the world’s first clinical trial of a novel investigational therapy that uses a combination of two viruses to attack and kill cancer cells, and stimulate an anti-cancer immune response.

Previous research by this team and others suggests that this approach could be very powerful, and could have fewer side effects than conventional chemotherapy and radiation, although it will take years to rigorously test through this trial and others.

The therapy was jointly discovered and is being developed by Brian Lichty, associate professor of pathology and molecular medicine of the Michael G. DeGroote School of Medicine; Dr. David Stojdl of the Children’s Hospital of Eastern Ontario and University of Ottawa; John Bell of The Ottawa Hospital and the University of Ottawa, and their research teams.

The clinical trial, which is funded by the Ontario Institute for Cancer Research, is expected to enroll up to 79 patients at four hospitals across Canada. Up to 24 patients will receive one of the viruses and the rest will receive both, two weeks apart.

In Hamilton, two patients so far have been enrolled in the trial at the Juravinski Hospital of Hamilton Health Sciences under the leadership of Dr. Sebastien Hotte, associate professor of oncology; preliminary lab testing has been done at St. Joseph’s Healthcare Hamilton and one of the viruses for the trial was manufactured at the Robert E. Fitzhenry Vector Laboratory at McMaster.

At a Friday news conference in Ottawa, one of the first patients in the study talked about the treatment.

Christina Monker, 75, a former nurse from Rockland, Ontario, is one of the first patients treated in the trial. She was diagnosed with cancer in 2012 and, despite six weeks of radiation therapy and two rounds of chemotherapy, the cancer spread to both her lungs. After completing another 30 rounds of chemotherapy, she enrolled in the trial at The Ottawa Hospital and was treated on June 2, 2015.

“The nausea of chemotherapy was worse than I ever could have imagined, but with the viral therapy I just felt like I had the flu for a couple of days, and the symptoms were easily managed,” said Monker. “It is too soon to know if I may have benefited from this therapy, but I’m very glad to contribute to this important research that could improve care for others.”

The idea of using viruses to treat cancer has been around for more than a century, with sporadic reports of cancer patients experiencing remarkable recoveries after viral infections. However, it is only in recent years that viral therapy has begun to be developed and tested in a rigorous way. Lichty, Bell and Stojdl began investigating viral therapies for cancer nearly 15 years ago when they worked together at The Ottawa Hospital.

“We found that when normal cells become cancerous, it’s like they are making a deal with the devil,” explained Bell. “They acquire genetic mutations that allow them to grow very quickly, but these same mutations also make them more susceptible to viruses.”

Both of these viruses have been engineered to stimulate an immune response against cancer cells that express a protein called MAGE-A3, but the Maraba virus also achieves an extra layer of anti-cancer activity by replicating inside many kinds of cancer cells and killing them directly. The AdMA3 virus was manufactured at McMaster, and the MG1MA3 virus at a specialized facility at The Ottawa Hospital.

“The idea behind this trial is to use the Adenovirus to prime the patient’s immune system to recognize their cancer, and then use the Maraba virus to directly kill their cancer and further stimulate their immune system to prevent the cancer coming back,” said Dr. Brian Lichty. “We’re enthusiastic about the potential of this unique therapy.”

“We’re very excited about this first clinical trial,” said Stojdl. “We’re continuing to push very hard to develop a suite of biological therapies with the goal of launching similar trials tailored to other types of tumours, including brain cancer and several devastating childhood cancers.”

Viral therapies are one component of a growing field of cancer research that seeks to use biological materials (including cells, genes, antibodies and viruses) to attack cancer cells and stimulate an anti-cancer immune response. This field of research has been called biotherapy or immunotherapy. Dr. Bell and his colleagues recently launched the $60M BioCanRx network to advance this area of research.

The Maraba virus is an important part of a broad biotherapeutics clinical trial development program in Canada that is combining viruses and vaccines with standard and emerging therapies to treat different types of tumours.

Lichty, Bell and Stojdl and their institutions, in cooperation with the Fight Against Cancer Innovation Trust, have formed Turnstone Biologics in order to engage the private sector and to help fund further clinical trials.