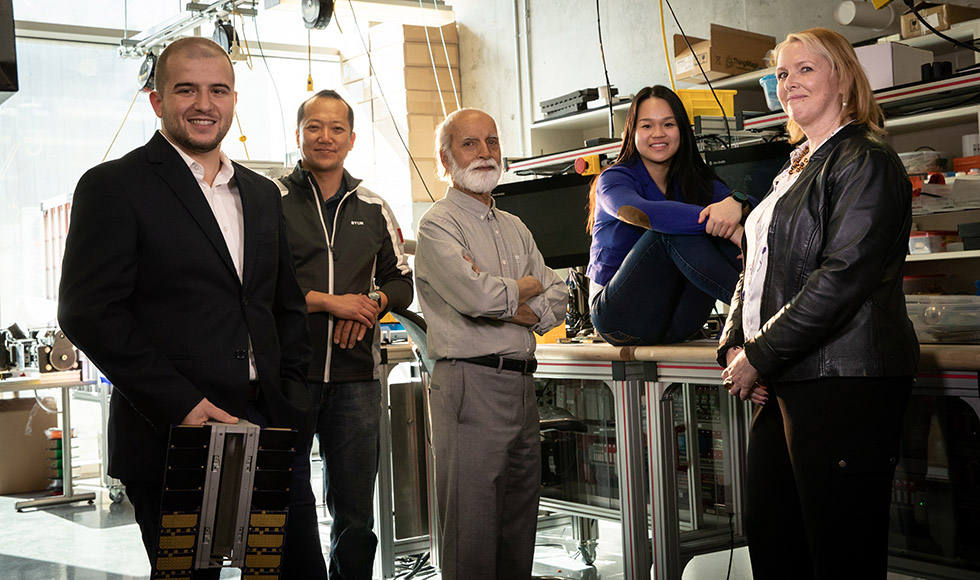 The Canadian Space Agency (CSA) announced today that a satellite designed and built by researchers at McMaster University, has been chosen as one of 15 projects that will be launched into space as part of the Canadian CubeSat Project.

Once tested and ready for space, the miniature satellite—roughly the size of a loaf of bread—is expected to be launched and deployed from the International Space Station (ISS) in 2021.

It will measure the nature and properties of potentially dangerous radiation astronauts are exposed to during spacewalks.

Researchers hope the radiation instrument aboard the satellite could replace current equipment on the ISS and be used to identify high dose areas, incoming solar storms and to make improvements to current radiation modelling tools as preparations continue for future missions into deep space, including Mars.

“We are at the stage of a new era of exploration,” says Fiona McNeill, director of McMaster’s Radiation Sciences Graduate programs. “But one of the problems we have is that space environments have some very serious health hazards. We are most concerned with cancer risks to astronauts who go on missions to Mars and are going to get a very large radiation dose when they are in space for years.”

The project was the brainchild of McMaster Radiation Sciences graduate Andrei Hanu, a former researcher at NASA’s Goddard Space Flight Center and now a senior scientist with Bruce Power. Hanu approached Soo Hyun Byun, a professor of Physics and Astronomy at McMaster, with the idea of building a radiation-monitoring satellite and together they assembled an elite student team.

Once in space, the satellite will begin a 9-month mission.  Each time it passes over the university campus, it will beam down reams of data which will be collected and analyzed by researchers on the ground, including Erica Dao, project manager and a PhD student in Radiation Sciences, who has been a member of the team for more than three years.

“This is a completely student-driven project,” she says.  “In every single step the students are designing, fabricating, testing and constructing the satellite. The students learn an incredible amount of technical skills.”

Roughly 40 undergraduate and graduate students have worked on the satellite project, named NEUDOSE: ‘NEU’ for neutrons, ‘DOS’ for dosimetry, or the measurement for radiation doses, and “E” for exploration.

This fall, some members of the team will travel to Palestine, Texas – home of NASA’s Columbia Scientific Balloon Facility – to test a prototype of the satellite aboard a stratospheric balloon reaching altitudes of 120,000 feet as part of a prestigious program called the High Altitude Student Platform. They are among only a dozen teams chosen from universities all over the world.

Rob Baker, McMaster’s vice-president, Research, congratulated the entire team and said the project represents “everything right” about student-engagement in research.

“This CSA program allows our students to engage in timely, innovative and relevant research that would otherwise be out of their reach.  It provides them with the requisite mentorship, thanks to our faculty leadership, and positions them to gain experience — while working with their peers across the disciplines — in a research field of strategic importance to Canada,” he says.