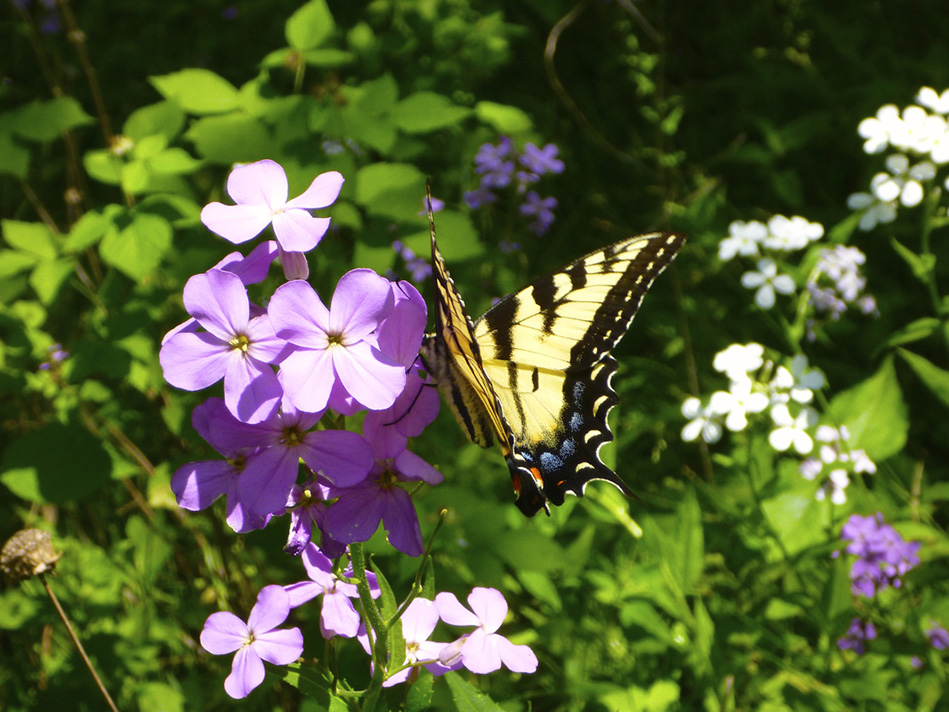 An eastern tiger swallowtail butterfly on a dames rocket flower in the McMaster Forest.

In a newly cleared field not far from campus, a carpet of prairie flowers and grasses is set to emerge this spring.

Those plants will literally rise from the ashes of invasive buckthorn shrubs that for decades had choked out hectares of other plant life – until McMaster researchers, students and community volunteers uprooted, cut, and burned them.

The new plants – all native species grown from locally produced seeds at St. Williams Nursery – will generate one of the most visible changes to the University-owned property, once home to a potato farm, long since overrun and largely ignored, until recently.

The work to naturalize the prairie is part of a broader effort to maximize the potential of the much larger and mainly wooded 48-hectare (115-acre) plot that the University Senate has officially named the McMaster Forest, and taken into the Campus Master Plan.

Today the lands, once abused by illegal dumping and bush parties, are being cleaned up, and their natural treasures – including some rare and endangered plant species – are being counted and measured.

This giant puffball mushroom was found in the McMaster Forest in the fall of 2013.

Tucked under the Niagara Escarpment off Lower Lions Club Road, just in from busy Main Street West, the McMaster Forest is an island of wilderness in an urban landscape. Its old-growth forest is dominated by ash and maple, dotted by some spectacular examples of sassafras, sycamore and tulip trees.

An ongoing census of all the trees, now 60 per cent complete, has counted 16,000 so far. Most of the treed portion of the property has also been mapped into 20-by-20 metre squares, with plans for the McMaster Forest to join a worldwide Smithsonian Dynamic Forest Program, which compares forest growth around the world.

Two cold-water creeks trickle through the property, tumbling down the bench of the escarpment, joining up into one creek that eventually joins Ancaster Creek on the west end of the McMaster main campus and flows into Cootes Paradise.

“It feels so beautiful and wild, even though you’re within city limits,” says Susan Dudley, the McMaster biologist who has been overseeing the naturalization of the property, with her colleague Chad Harvey and members of the President’s Advisory Committee on Natural Lands.

“My real satisfaction is that it’s now part of the University,” says Harvey, a biologist who teaches in the Integrated Science program. “The research potential is only limited by people’s imaginations.” The McMaster Forest, which is open to the campus community and the broader public for ecologically responsible use, is already a hub for research, and is set to be studied from many academic angles that include biology, climate science, earth science, archaeology, art and more.

An unpaved pathway around the prairie is expected to open in the spring, for example, that will incorporate design elements from Rehabilitation Science students, to improve access for people using wheelchairs and strollers. The path is part of the work at the site that has been enabled by a two-year grant from the W. Garfield Weston Foundation.

Tall grass plantings are planned as a privacy screen for neighbours in the area, and a demonstration garden of native species has been implemented to help users to identify local plants such as the hairy black-eyed Susan. A McMaster art student has done watercolour paintings to show users what the mature plants will look like. Art in the forest.

A teaching and research centre is also proposed for the site, and is now in the planning stages.

Already, Biology and Integrated Science students are catching the bus by the Life Sciences Building to do field work at the site, just 10 stops away. There, they study the effects of emerald ash borers, and monitor the bee and deer populations, for example.

There are still some issues with campfires and vandalism, but increasing traffic from more gentle users, including birdwatchers, botany buffs and photographers is helping to calm things down, say Dudley and Harvey.