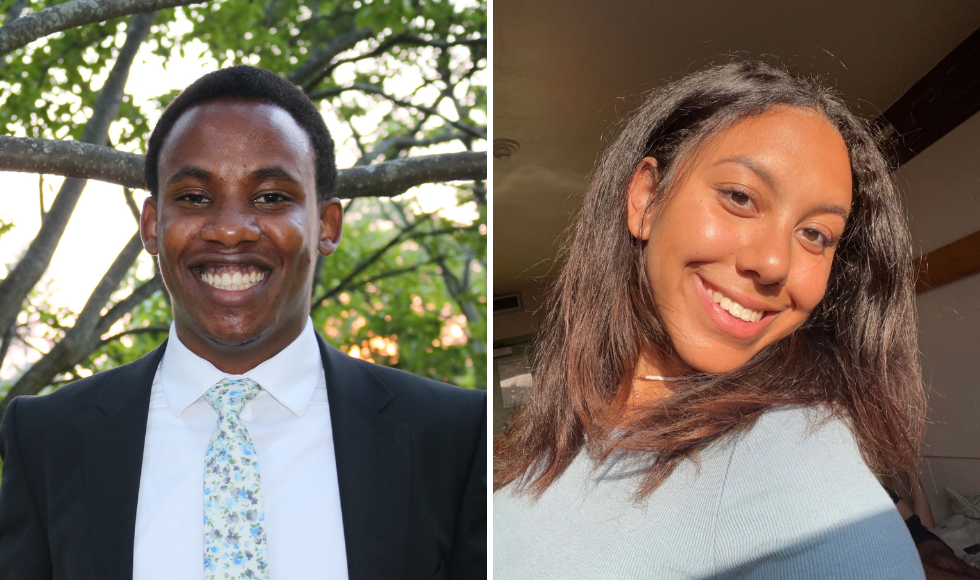 Robert Ngunjiri and Serena Stoddart have both endured long seasons of feeling out of place. Now, they are scholarship winners who have discovered a home and a launchpad for impact at McMaster Engineering.

A native of Nairobi, Kenya, Robert Ngunjiri emigrated to Canada in 2013 to pursue an undergraduate degree in chemical engineering. He was passionate about developing real-world solutions to environmental pollution, but he struggled to gain a foothold in the Canadian workforce.

“I had to take my first work term off because I couldn’t find a co-op position,” he remembers. “I had trouble translating my past work experience into something Canadian engineers found useful.”

He also began his degree at the age of 22, making him feel slightly out of step with a younger cohort.

During his second year, things took a positive turn when he secured a co-op position with a professor who led a team in developing biopolymers to replace synthetic polymers, a major source of global pollution. Ngunjiri was immediately hooked by research and continued onward to earn a master’s degree in materials science.

He spent the next two years in industry, where he continued working to develop biopolymers. Gradually, he began to look further up the supply chain at the process of refining crude oil into plastics. Inspired to continue along this path, he was accepted into a PhD program at McMaster Engineering, where he joined the Nanomaterial Catalysts for Sustainable Energy Technologies lab.

Ngunjiri’s research group focuses on carbon dioxide electroreduction, the process of using electricity to convert carbon dioxide into ethylene, which is needed to create polymers, instead of deriving it from crude oil. This innovation has the potential to prevent the release of 828 million tonnes of carbon dioxide into the atmosphere every year.

“I’ve discovered a way to make a tangible contribution to fighting climate change,” says Ngunjiri. “My own parents, who are farmers, have lived with its disastrous effects for a long time now.”

Ngunjiri was “in a bit of shock” when he found out he received this year’s Indigenous and Black Engineering/Technology (IBET) PhD Fellowship. Outside of research, he spends most of his time with his wife and their 20-month-old son, exploring parks and gardens in the Hamilton area. “This fellowship represents substantial economic support for me and my family,” he says. “And, on a more personal note, I finally feel seen and affirmed as an individual after years of struggle. The fact that McMaster is making fellowships accessible to people from non-traditional backgrounds goes a long way.”

Serena Stoddart spent most of her childhood in Barrie, Ontario, half a world away from where Ngunjiri was born and raised, but she experienced a similar sense of dislocation when her family moved north from Etobicoke. Barrie has become significantly more diverse over the years, but its Black community is still a small minority. “It was culturally very different from the Toronto area, to say the least,” says Stoddart.

During her high school years, she invested countless hours in helping shine a spotlight on the richness of her community. During Black History Month, the Black History Society that she co-led created a variety show that was aired by Rogers TV, as well as a video highlighting Black-owned businesses in Barrie.

When it came time to attend university, Stoddart was searching for a culturally diverse, welcoming home with a reputation for excellence. She also hoped to find a program that would set her on the right trajectory to become a physician.

Stoddart had considered a career in medicine for as long as she can remember. Growing up, she maintained close ties with her grandparents and other older family members who often relied on her to pick up medicine and support them in any way she could. She also spent time caring for her younger sister, who has tachycardia. “I learned from a young age that I like being someone whom others can rely upon to be a caregiver,” she says.

McMaster Engineering’s integrated biomedical engineering program proved to be an ideal fit. “I knew when I came across this program that it was different from anything else I had encountered,” says Stoddart. “Instead of just studying science, I have the opportunity to do science in my classes. There is always real-life application of what we’re learning.” While she has not yet decided on an area of medicine to pursue, she has enjoyed the process of working with prosthetics in one of her first classes at McMaster Engineering.

In and out of the classroom, Stoddart has appreciated McMaster’s intentional efforts to advance equity, diversity and inclusion. “Everywhere you look, there are opportunities to get involved, no matter your background,” she says. From the support offered by the Black Student Success Centre to class discussions of health equity, the inclusivity of the campus environment has helped put Stoddart at ease.

Stoddart was also excited to discover that applying to McMaster Engineering qualified her for a wide variety of entrance awards. Soon after enrolling, she found out she had received the Mac Entrance award winner for the National Society of Black Engineers (NSBE), an initiative created during the 2020-21 academic term.

“I’m extremely happy to see the scholarship our team pushed so hard for serving its intended purpose and look forward to seeing the impact it will have on young aspiring Black STEM students,” says Akera Otto, Acting President of McMaster’s NSBE Chapter.

As she navigates her first year of engineering, Stoddart has experienced a boost of confidence from receiving the award. “It feels like an acknowledgement that I have something to bring to the table,” she says.

According to Heather Sheardown, Dean of the Faculty of Engineering, awards like the IBET fellowship and NBSE scholarship play a critical role in attracting and supporting talented individuals from underrepresented backgrounds.

“Students like Robert and Serena make McMaster Engineering a better place to learn and grow,” says Dean Sheardown. “We will continue working hard to ensure that students from diverse backgrounds have all the support they need to maximize their potential.”