McMaster community works together to send $750,000 in PPE and gear to Uganda 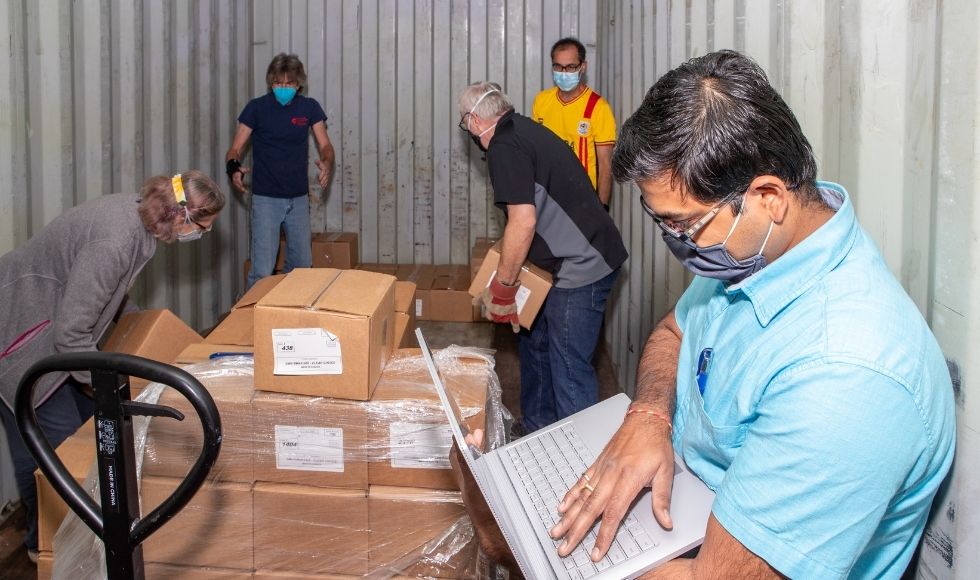 A team of McMaster researchers and community partners and donors have gathered nearly $750,000 in PPE and other gear to ship to Uganda. (Photos by Georgia Kirkos, McMaster University)

A team of doctors, researchers and staff – from both the university and McMaster Innovation Park – have pooled their time, talent and contacts to help their friends and colleagues a world away in their efforts to battle COVID-19.

Back in the summer, Ally Prebtani, who heads the department of medicine’s Global Health program, was looking to help his colleagues at Makerere University, Mulago Hospital and other medical centres in Uganda secure additional PPE and critical medical equipment for their medical staff, learners and patients.

He turned to colleague Catherine Clase, who’s been a champion for raising awareness on best mask protocols, who connected him with her colleagues in McMaster’s Centre of Excellence for Protective Equipment and Materials (CEPEM), and the plan was soon in motion.

CEPEM’s Rakesh Sahu rallied the centre’s academic and industry partners and donations, while Darren Lawless, McMaster’s assistant vice-president – research, innovation and partnerships, turned his attention to figuring out the logistics.

Lawless credits the logistical expertise of MIP maintainance manager Scott Bennett and support from the Faculty of Health Sciences, the department of medicine, Hamilton Health Sciences, the Aga Khan University, and the creativity of friends and colleagues in Uganda in making it all work.

The end result: Close to $750,000 worth of donated materials, including masks, face shields, gowns, visors and other much-needed equipment  was loaded onto a shipping container at MIP’s Frid Street facility and will depart for Uganda next week.

“When I first put the idea out there, I never imagined we’d have such enormous success,” says Prebtani.

“CEPEM was the catalyst, but it really was a team effort. My huge thanks to everyone, personally and on behalf of my colleagues in Uganda.

“It’s an overwhelming gesture, yet so typical of the people at McMaster who are always keen to help others, both at home and around the world.”