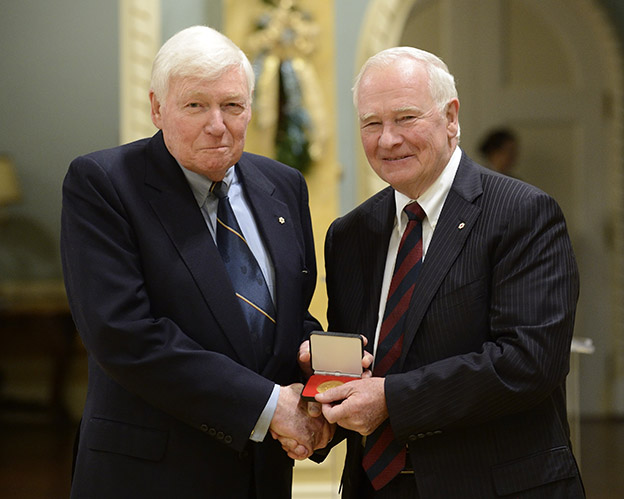 Red Wilson, left, with Canada's Governor General David Johnston, right. Wilson was given the Vanier Medal for public service today at a ceremony at Rideau Hall in Ottawa.

“On this occasion, His Excellency will recognize and honour Mr. Wilson for his contributions to Canadian public service, which have had a lasting and positive influence on the lives of many Canadians,” says a statement from Rideau Hall.

Wilson has built a parallel career of private industry success and public service, voluntarism and philanthropy. He worked as President and CEO of Redpath Industries and as President, CEO and Chairman of BCE Inc. He also co-founded the Historica Foundation of Canada.

Wilson has been a generous supporter of McMaster, with a focus on investing in the liberal arts. His $10M gift toward the new home of the Faculties of Social Sciences and Humanities was announced in 2007. L.R. Wilson Hall is now under construction on campus.

In 2008 and again this year, he gave $2.5M in support of the Wilson Centre for Canadian History. Other gifts include $1M to establish the L.R. Wilson Professor in Canadian History and a gift of $500,000, matched by BCE, to fund the L.R. Wilson/Bell Canada Chair in Data Communications in the Faculty of Engineering.

©Her Majesty The Queen in Right of Canada represented by the Office of the Secretary to the Governor General, 2014.