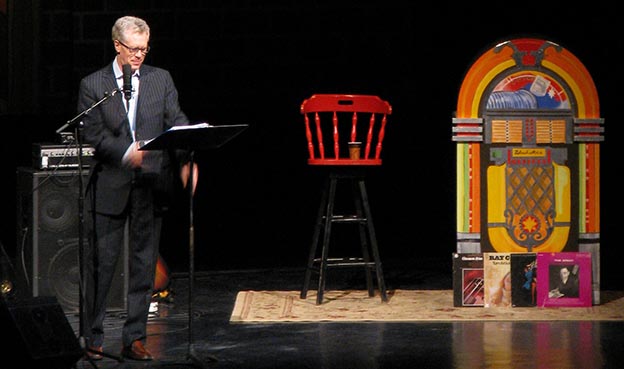 Longtime CBC personality Stuart McLean is among those being awarded honorary degrees at this year's spring convocation ceremonies.

Honorary degree recipients are recognized for their contributions in such areas as public service, education and scholarship, creative and performing arts, and for their work within the McMaster community.

Approximately 5,000 students will graduate during convocation ceremonies at Hamilton Place. Chancellor Suzanne Labarge, who was formally installed in the fall of 2013, will preside over the ceremonies.

Below is a list of who will be receiving honorary doctorates.

James Hogg (Doctor of Science) is a world renowned biomedical scientist who is a professor emeritus of Pathology at the University of British Columbia and a faculty member at St. Paul’s Hospital at UBC.  There, he established a pulmonary research lab which has become a centre of excellence for its work on the structure and functional relationships in asthma and in chronic obstructive pulmonary disease (COPD).

Robert Burgess (Doctor of Laws) is an independent consultant and corporate director for a number of public and private companies.  He served as CEO of Macromedia Inc., a leading provider of internet and multimedia software, for nearly 10 years and joined the board of Adobe Systems Incorporated after it acquired Macromedia in 2005. Burgess holds a Bachelor of Commerce degree from McMaster and has received the Michael DeGroote Distinguished Alumni Award.

Silvina Maria Malvarez (Doctor of Science), a leader in nursing on the international stage, she spent 10 years as regional advisor on Nursing and Allied Health Human Resources for the Pan American Health Organization.  She has won many awards recognizing her dedication to mental health, human resources development, research and professional organization in nursing.

Stuart McLean (Doctor of Laws) is a longtime CBC Radio personality who is best known for his radio program “The Vinyl Café” where he recounts the exploits of a fictional family. A subsequent book, Stories from the Vinyl Café, became a Canadian bestseller and was followed by a series of collections. McLean now takes the show on the road to theatres across the country, broadcast every weekend on CBC Radio.

Archie Hamielec (Doctor of Science) is an educator, researcher and consultant who is considered one of the founding fathers of polymer reaction engineering.  In 1982, he was appointed the Founding Director of the McMaster Institute for Polymer Production Technology, attracting a large number of industrial projects to expand research at McMaster.

Mamdouh Shoukri (Doctor of Science) is serving his second term as president and vice-chancellor of York University.  As a former dean of engineering at McMaster, Shoukri spearheaded a major expansion of the faculty nearly doubling its enrolment and faculty complement. As vice-president (Research & International Affairs) he helped make the McMaster Innovation Park a reality.

Andrew Weaver (Doctor of Science) is an internationally regarded climate modeler and lead author on the Intergovernmental Panel on Climate Change’s influential report, Climate Change 2007: The Physical Science Basis.  The panel, along with former US Vice President Al Gore, was awarded the 2007 Nobel Peace Prize.  Weaver is deputy leader and MLA for the Green Party of British Columbia.

During the afternoon ceremony, Narayanaswamy Balakrishnan, an award-winning professor in the Department of Mathematics & Statistics will be named Distinguished Professor, the highest honour an academic can receive from the University.   One of the most cited statisticians of all time and the most heavily cited researcher at McMaster, Balakrishnan has authored or co-authored more than 400 research papers across many disciplines.

Richard Sennett (Doctor of Laws) is the Centennial Professor of Sociology at the London School of Economics and University Professor of the Humanities at New York University.  Sennett is best known for his studies of social ties in cities and the effects of urban living on individuals in the modern world.