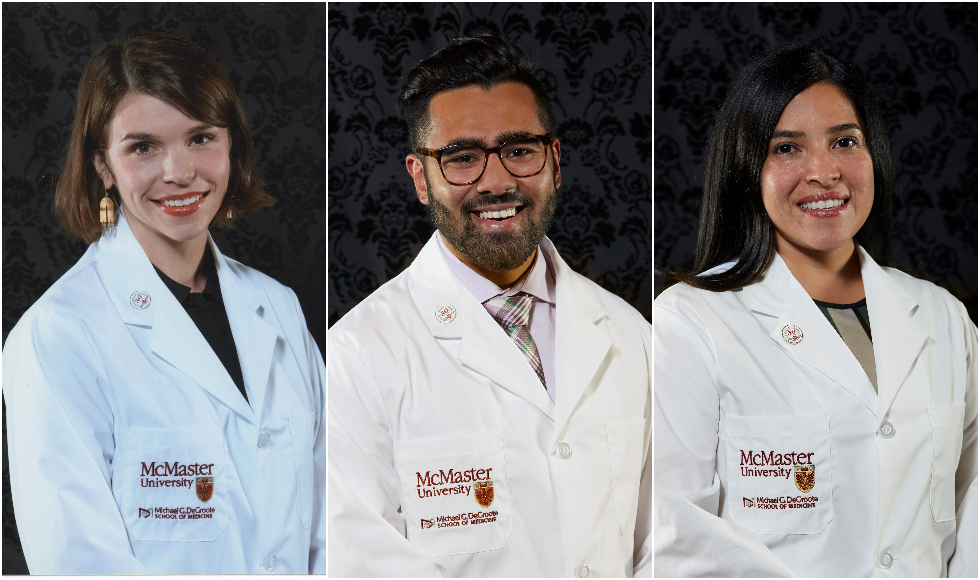 Alice Cavanagh took a winding road to medical school, but she wouldn’t have it any other way.

Cavanagh first came to McMaster University 10 years ago, completing a bachelor of arts and science, then a master of arts in gender studies. After working and then initially returning to school to become a midwife, Cavanagh was in the first year of her doctoral studies in health policy when she successfully applied to McMaster’s MD/PhD program.

“I guess you could say that I can’t get enough of learning or McMaster,” said Cavanagh, who was raised in Toronto.

“Because of this, I’ve been described as a non-traditional medical student, but I think it’s more complicated than that. I might be an interdisciplinary learner, but my mom is a physician and the privilege that helped engender meant that medicine was a possibility for me.”

Cavanagh’s mother is Patricia Cavanagh, a psychiatrist in Toronto and a McMaster MD ’89 alumna.

While she began classes with her 2021 cohort, Cavanagh anticipates graduating with the Class of 2024 after finishing her doctoral work in medical education as a student in McMaster’s Health Policy Program.

“My research explores how physicians learn to think about sexualized violence over the course of their medical training,” she said. “This work was borne out of my experiences as a volunteer with SACHA – the Sexual Assault Centre of Hamilton and Area. In the process of accompanying survivors to seek emergency medical care, I’ve seen uncertainty on the part of many of the health-care providers.

“My hope is that my research will identify ways for medical schools to train physicians who are better equipped to care for people who have experience sexualized violence.”

Looking to the future, Cavanagh says she would like to work as a clinician scientist and as an educator. She’s considering a residency in public health or family medicine.

Cavanagh says all of this has been possible because of the support of her family and partner. She added she is thankful for guidance from her McMaster research mentors Meredith Vanstone, Stacey Ritz, Harriet MacMillan and Melissa Kimber.

“My capacity to follow this path is entirely owing to the community of people who have supported me,” she said. “My parents, in particular, have been rocks.”

Looking to the medical school’s future, Cavanagh says that she hopes to see changes in admissions.

“Like me, students going into medicine in Canada disproportionately come from higher-income households; I hope in the next 50 years, we change this,” she said. “We need to ensure that the physicians McMaster educates are truly reflective of the huge diversity of the communities we will serve and that means recognizing, and breaking down, barriers.”

Reducing the stigma of mental illness in medical students and the health-care system is important to Satyam Choudhuri. “It can be so isolating and scary, especially in a career that is so demanding, and we’re still not that close to breaking down the stigma of mental illness among health-care providers,” he said. “Being resilient and going through mental illness are not mutually exclusive by any means. Taking care of yourself and reflecting on what you need to do to be well is actually a part of being resilient.

“People should not be scared to reach out for help.”

Choudhuri says he works hard to take care of himself, with an important outlet for stress being the practice of mindfulness. As a co-chair of the Mindfulness in Medicine group at McMaster, he hopes to help fellow medical students find time to take a breath through weekly drop-in meditation sessions.

“I always challenge my colleagues in medical school to find a time when they are not thinking about medicine, since it’s a career where it’s all or nothing,” said Choudhuri. “I want them to take a moment to process what’s going on in their body and their lives.”

McMaster and Hamilton are a second home to Choudhuri, who completed his Bachelor of Health Sciences degree here. He has become passionate about the people and city of Hamilton, and the local Forge Football Club.

Born and raised in North York as the son of immigrants from India, he is mindful of health equity for marginalized populations.

As such, he volunteers as the partnerships and outreach lead with Toronto-based Stand Up for Health. The non-profit, grassroots organization aims to use experiential learning in order to generate meaningful discussion and action surrounding the social determinants of health.

“Being able to advocate impacts change on both macro and micro levels,” he said. “I can see myself doing some big things in medicine and making change happen in the communities I care about, especially among immigrants and those who struggle to make ends meet.”

After completing his undergraduate medical degree, Choudhuri hopes to pursue a residency in psychiatry.

He credits his parents, Ron and Leena Choudhuri, for fostering a strong work ethic and supporting him unconditionally. Elisa Levi says she is proof that is never too late to go back to school to pursue your dream.

A proud Anishinaabe mature student at the Niagara Regional Campus, Levi had a successful career running her own consulting firm.

“I had worked a number of years in Indigenous health on a national level but, in evaluating next steps, I thought about going back to school, and community health is something I always had a passion for,” said Levi. “There were some other opportunities I was interested in, but I recognized being a physician was one of the requirements, so I applied to McMaster and was accepted.

“I also knew the contribution I could make in primary care where there are definitely gaps.”

Levi’s Indigenous heritage is an integral part of her story. She spent the early years of her life in Toronto and Elsipogtog First Nation, New Brunswick. Her family then moved to Neyaashiinigmiing, Ontario in the Bruce Peninsula.

Levi holds a bachelor of science degree with a focus on nutrition from Ryerson University, and a master of public health from Lakehead University.

Amidst her studies at McMaster, she continues to make time for volunteerism. She is a board member for the Edkaagmik Nbiizh Neyaashiinigamiingninwag Edbendaagzijig Trust in her community, and sits on the boards of Red Sky Performance and the Anishnawbe Health Foundation. She is also a member of the planning committee for Building Our Future 2020 Indigenous Health Conference in Niagara Falls.

In addition, she’s also the mother of two daughters, aged five and three. She has relocated her family to St. Catharines to make commuting easy to the Niagara campus, noting the school and the community have made them feel welcome.

She added that her daughters have been particularly understanding of her busy schedule.

“When I started medical school they were just aged four and two,” she said. “They are so young, and because of that, they have such open perspectives and are so positive. They just get it. They know I have to study and that it is important to mom.”

Levi is eyeing a residency in family medicine or public health after completing her medical degree in 2021. Beyond that, she has a good idea where she wants to land.

“I hope to practice as a medical officer of health in either my region of Neyaashiinigmiing or on a national level,” she said. “I want to continue to practice towards mino-bimaadiziwin, which is Anishinaabe teaching meaning a good way of life, also knowing the role of a physician contributes to collective wellbeing.”