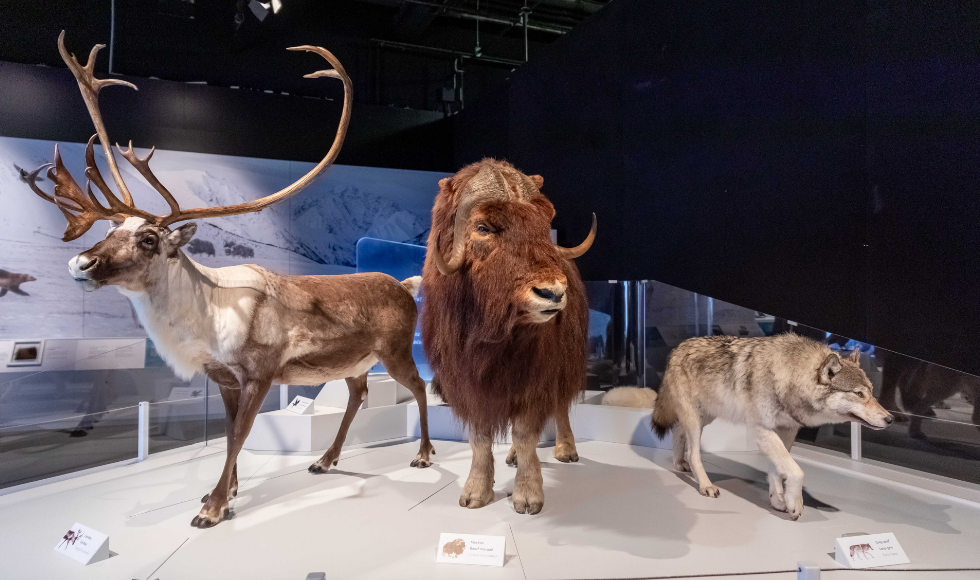 Hendrik Poinar is used to travelling through time, back to the Ice Ages, researching pieces of the past to learn about our present and future. And now, visitors to the Ontario Science Centre can join the evolutionary geneticist in experiencing the icy landscape that was our world 80,000 years ago.

Poinar, the director of the McMaster Ancient DNA Centre, has teamed up with the Ontario Science Centre to present the exhibition Planet Ice: Mysteries of the Ice Ages, which was created and developed by the Canadian Museum of Nature.

The exhibit, which is on now until March 20, 2022, is a hands-on multimedia experience that the researcher hopes will leave people of all ages inspired about their role in a changing environment.

Poinar, who is also a principal investigator with the Michael G. DeGroote Institute for Infectious Disease Research, uses molecular information like the genome of the wooly mammoth to ask big anthropological questions around climate change, disease and extinction.

Visitors to the exhibit can get up close to now-extinct animals that once roamed a planet that was blanketed in kilometres-thick blocks of ice.

“I think the best way to intrigue kids and get them involved is to talk about the majesty of these amazing, iconic creatures of the ice age,” says Poinar.

Some of those creatures include mammoths, wooly rhinos, large bisons and ground sloths — animals that had an incredible adaptive power thanks to their harsh, icy environment, according to Poinar.

“It’s an engaging exhibit, it’s a touchable exhibit. It’s right in front of your eyes, not in front of a screen,” says Poinar.

The show also looks at the massive role ice has played in forming our landscape, and what our world — one that’s facing a decreasing amount of polar ice sheets and glaciers — could look like one day.

And while it’s easy to talk about the “doom and gloom” of today’s warming climate, Poinar says he see the exhibit as a fun event that will hopefully inspire kids to think about the small changes they can make that help in the fight against global warming.

“While we may look back in pain at some of that loss,” says Poinar, “I think what’s more important is to think about what do we have the potential to lose if we don’t act now.”

Poinar says that while it is nice to share his research, it is inspiring a generation of science-minded kids that he is most excited about.

“The joy of that kind of discovery is something so critical. We need to keep kids interested in science because science is based in reality and if you can make empirical-based decisions, that’s the only way to save the world from a little bit of the doom that we’re in,” says Poinar.

And a hands-on, experiential learning opportunity like Planet Ice: Mysteries of the Ice Ages could have a huge impact on climate change, according to the researcher.

“I think the more people we can get involved and aware of what the ramifications are — but also what we can do to mitigate some of these things — it’s all possible and its doable,” says Poinar.

As part of Thrive Week at McMaster, two students share their stories of building resilience and effectively managing the stress of personal and academic responsibilities.

Explore ways to support your mental health at Thrive Week 2022

Thrive Week is a chance to come together as a community to learn about, talk about, and explore ways to support our mental health.