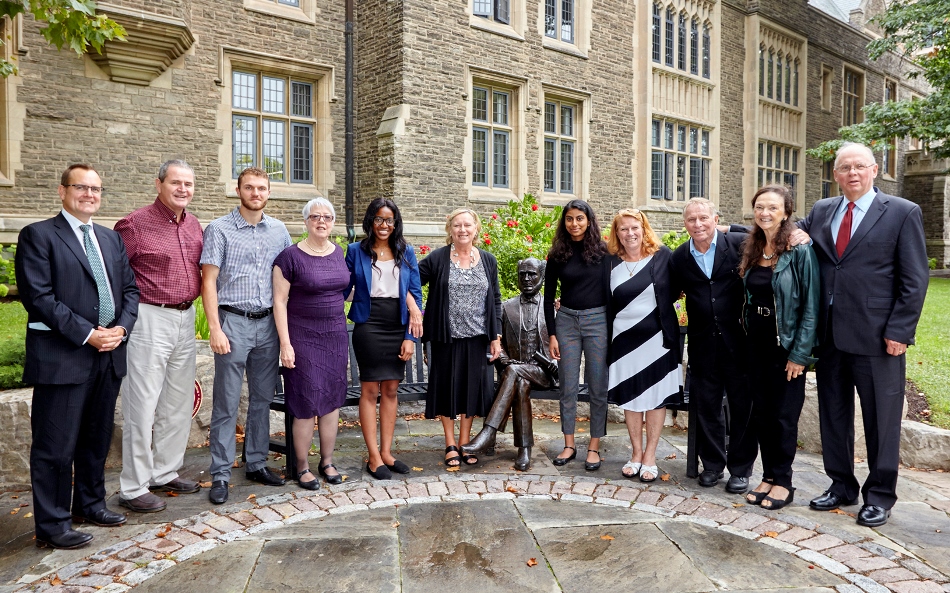 The family of Robert Kulperger ’63 visited campus on September 23 to celebrate his life and legacy and congratulate the first three recipients of the prestigious student awards named after him.

Entrepreneur, inventor, chemical engineer – Robert Kulperger ’63 has left a US$500,000 gift in support of McMaster students.

“Bob was a very smart guy, very high-energy and ambitious,” says Ed Kulperger of his brother, who passed away in September 2015. Raised in a hardworking family of Hungarian origin, they grew up in the Niagara Falls area. The eldest of four children, Bob graduated from McMaster University in chemical engineering in 1963 – the third graduating class of the newly founded Faculty of Engineering.

After a 25-year career at Union Carbide, he launched his own business, Natural Chemistry, in 1989. He had seen the growing demand for naturally based, yet reliable, cleaning products – and as a chemical engineer he was fascinated by nature’s ability to transform energy and matter quickly and efficiently. After many years of 18-hour days, he and business partner Mark Munford forged a successful company in both the U.S. and Canada.

“Bob knew how to put together a business,” recalls his brother. In 2015, Kulperger became Chairman of the Board of Natural Chemistry, while Munford took over the CEO role.

On September 23, his family gathered on campus to celebrate his life and legacy and to congratulate the first three recipients of the prestigious new awards.

Dean of Engineering Ishwar Puri recalls meeting Kulperger in 2013. “Bob spoke so enthusiastically of his student experience at McMaster and how it helped prepare him for a successful career. We are tremendously grateful for this generous gift – the largest to date to the Department of Chemical Engineering – which will indeed be a wonderful tribute to him in perpetuity.”

“I remember Bob particularly well,” says professor emeritus Cameron Crowe, one of the first faculty members hired at the Faculty of Engineering following its founding in 1958. Co-author of A Brief History of Chemical Engineering at McMaster, Crowe remembers Kulperger as “a very charming young man with an outgoing personality. I am very thankful to him for this generous scholarship – and this very progressive donation to help us teach students in new ways.”

The Robert J. Kulperger Experiential Learning and Discovery Fund was established in memory of Kulperger’s parents, John and Magdalen Kulperger, who understood the importance of education and hard work to succeed in life. Funds will be awarded to a chemical engineering student to participate in a paid research placement. Oyindamola Giwa is the first recipient.

The Robert J. Kulperger Scholarship, established in memory of Dean Emeritus John W. Hodgins and in honour of Professor Emeritus Cameron Crowe, will be awarded to a chemical engineering student who has demonstrated academic achievement, leadership, and entrepreneurial ambitions. With a value of $10,000, it is the Department of Chemical Engineering’s most prestigious award to date. Uma Umatheva and Kody Kazda are the inaugural recipients.