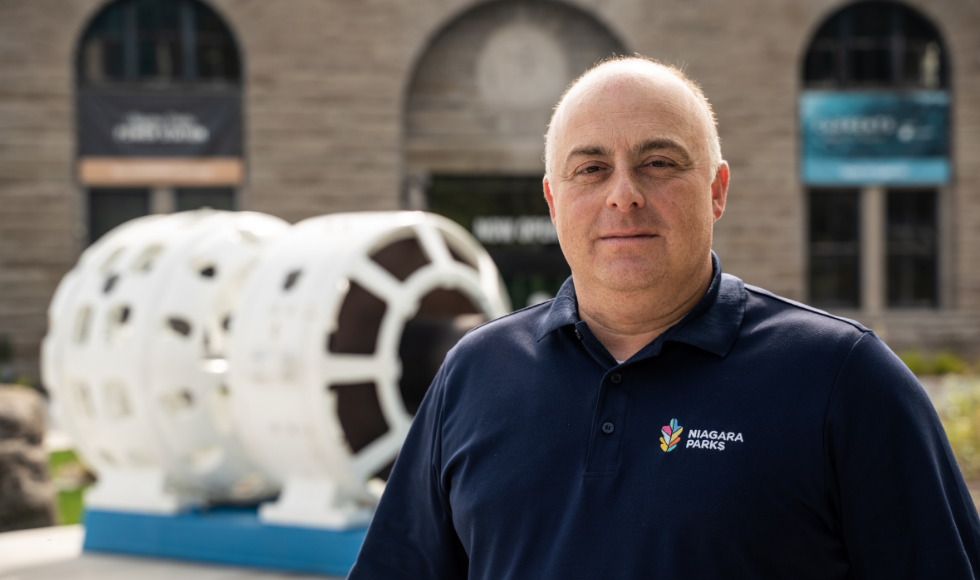 Marcelo Gruosso is pretty excited about the recent opening of the Niagara Parks Power Station – a new Niagara attraction that brings a once dormant 115-year-old hydropower station back to life in an entertaining and educational experience.

And he should be.

“The restoration of the Canadian Niagara Power Station is the most remarkable project that I have worked on in my career,” says the McMaster University Faculty of Engineering graduate.

As senior director of engineering at Niagara Parks, Gruosso led a team that set out to transform Canada’s first hydroelectric alternating current generation station into an interactive tourist destination.

Visitors to the site can now immerse themselves in the history of the hydropower station and see the unique architectural features Gruosso and his team have preserved and renewed.

“At night, our visitors can experience an immersive light, sound and video projection show that highlights the beautiful architecture of the building, taking them through some spectacular visuals that create an emotional journey of power and electricity, supported by an original music score,” says Gruosso.

In 2022, visitors will be able to take a glass-walled elevator 180 feet below the site to an underground tunnel where they can see the levels of infrastructure that make up the engineering marvel.

“The view from the end of the tunnel is unforgettable. Our visitors will walk 2,200 ft through the 25 ft diameter brick-lined tunnel to end up at a portal to get a magnificent view of the American Falls,” says Gruosso.

Born in Montevideo, Uruguay, Gruosso’s family immigrated to Canada when he was five-years-old and his parents worked multiple jobs to put their children through university.

“Studying engineering at McMaster was the most challenging and rewarding experience of my life at the time,” says Gruosso.

“The environment was incredible, and although the first couple of years adjusting to living on my own were challenging, I was able to persevere, make some great friends, enjoy playing intramural sports and living the university life.”

After graduating in 1998, Gruosso worked for a company in Niagara Falls that supplied parts for the global automotive industry.

He was soon selected as a future leader within the company, travelling to many places around the world, including the U.S., Mexico, Germany, Spain and Brazil.

“It was amazing both professionally and personally. I was able to experience different cultures, technologies and business approaches to operating parts manufacturing facilities,” says Gruosso.

The economic downturn of 2009 forced his company into insolvency. Gruosso was kept on by the company for several months to tie up loose ends as the company’s North American operations came to a close.

“This was probably the most challenging and most emotional experience at the time in my life, but looking back it was an incredible learning experience,” says the mechanical engineer.

That led to some time off for Gruosso where he was able to focus on his family – his wife Sandra and their two sons Mateo and Marco.

Another son, Maximo, was on the way when the Niagara Parks Commission offered him the senior director of engineering position.

And it was while working there full-time that Gruosso started earning his Executive MBA from the University of Guelph with a focus on hospitality and tourism.

“This really allowed me to understand and work hand-in-hand with our teams in finance, marketing, sales and business development,” says Gruosso.

He wants engineering students to know that anything is possible.

“Your first year or maybe even two at Mac in the engineering program can be very challenging both academically and personally, but find a way to persevere, make friends, get involved, focus on your studies, talk about your challenges and use all the resources available to you to help you find that light at the end of the tunnel,” advises Gruosso.

“Because what awaits on the other side is a great future.”