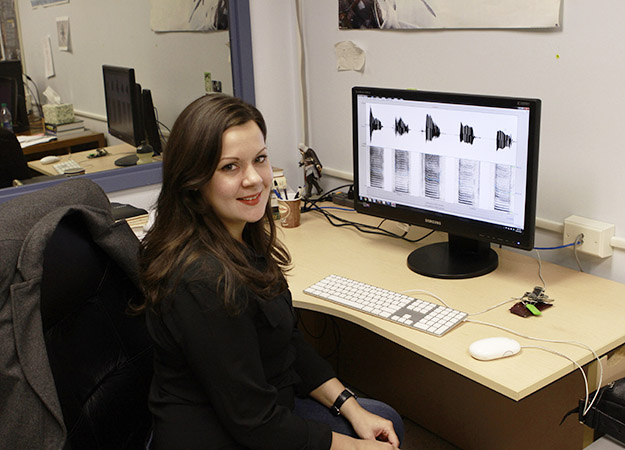 Ace of bass. Jillian O’Connor, lead author of the study and a postdoctoral fellow in the Department of Psychology, Neuroscience & Behaviour.

Men with low-pitched voices have an advantage in attracting women, even though women know they’re not likely to stick around for long.

McMaster researchers have found that women were more attracted to men with masculine voices, at least for short-term relationships.

Those men were also seen as more likely to cheat and unsuitable for a longer relationship, such as marriage.

The study, published online in the journal Personality and Individual Differences, offers insight into the evolution of the human voice and how we choose our mates.

“The sound of someone’s voice can affect how we think of them,” explained Jillian O’Connor, a postdoctoral fellow in the Department of Psychology, Neuroscience & Behaviour and lead author of the study.

“Until now, it’s been unclear why women would like the voices of men who might cheat. But we found that the more women thought these men would cheat, the more they were attracted to them for a brief relationship when they are less worried about fidelity.”

For the study, 87 women listened to men’s voices that were manipulated electronically to sound higher or lower, and then chose who they thought was more likely to cheat on their romantic partner.

Researchers also asked the participants to choose the voice they thought was more attractive for a long-term versus a short-term relationship.

“From an evolutionary perspective, these perceptions of future sexual infidelity may be adaptive,” explained David Feinberg, an assistant professor in the Department of Psychology, Neuroscience & Behaviour.

“The consequences of infidelity are very high, whether it is emotional or financial, and this research suggests that humans have evolved as a protection mechanism to avoid long-term partners who may cheat,” he says.