Looking for life in all the wrong places 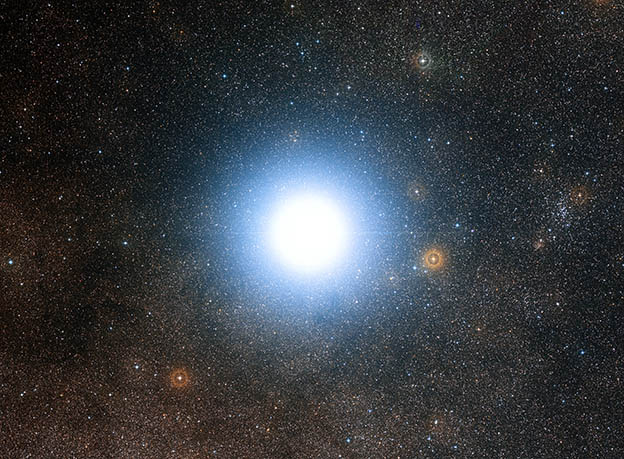 Alpha Centauri, the closest star system to the Solar System. Astrophysicist René Heller of McMaster’s Origins Institute says our planet may not be the most ideal place for life and scientists need to consider non-Earth-like, so-called “superhabitable” planets.

Scientists have long focused their search for extraterrestrial life on Earth-like planets – but that may be a mistake, according to a McMaster researcher.

Astrophysicist René Heller of McMaster’s Origins Institute says our planet may not be the most ideal place for life and scientists need to consider non-Earth-like, so-called “superhabitable” planets.

“The Earth just scrapes the inner edge of the solar system’s habitable zone – the area in which temperatures allow Earth-like planets to have liquid surface water,” says Heller. “So from this perspective, Earth is only marginally habitable. That led us to ask: could there be more hospitable environments for life on terrestrial planets?”

Heller and co-author John Armstrong of Weber State University describe superhabitable planets in a paper published in the journal Astrobiology early in January.

In it, they outline some of the characteristics such planets might have. They include many, shallower bodies of water (rather than a few large oceans), a more reliable global “thermostat” that impedes ice ages, and a magnetic shield, to protect the planet from cosmic radiation.

Heller says the theory means astronomers should be aiming their telescopes at planets that have so far not garnered much attention in the search for extraterrestrial life.

“We propose a shift in focus,” he says. “We want to prioritize future searches for inhabited planets. We’re saying ‘Don’t just focus on the most Earth-like planets if you really want to find life.’”

But is the discussion about which planets to look at even worth having? How likely are we ever to find life on another planet?

“Statistically speaking, I would say it’s very unlikely that there is nothing out there,” says Heller. “For the first time in history, we have the ability – both technical and intellectual – to find and classify potentially inhabited planets. It’s just a matter of how we spend our observation time.”

Heller expects the paper to serve as a launching point for a debate about superhabitability. He says it may take some time for the scientific community to come around to the theory.

“When you follow a certain pattern for decades, it can be hard to change your mind.”