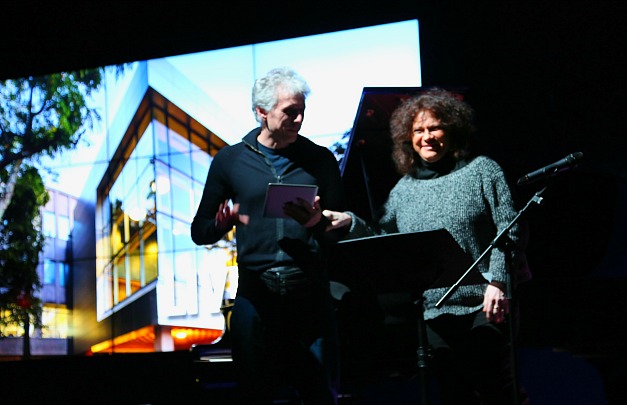 Award-winning blues singer, Rita Chiarelli (right)performed for an audience of about 50 members of Hamilton's creative community at The Creative Exchange, a recent event to showcase the state-of-the-art performance capabilities of the LIVELab.

One moment, the audience is sitting in the LIVELab experiencing the power of award-winning blues singer Rita Chiarelli’s voice as it echoes through the room, the next; the echo is virtually silenced.

She hasn’t stopped singing, in fact, she continues to belt out her tune, but with a touch of the iPad, the acoustic environment in the LIVELab has been completely altered, causing Chiarelli’s voice to lose its powerful impact.

This demonstration was part of The Creative Exchange, an event held recently to showcase the performance capabilities of the LIVELab, a state-of-the-art virtual acoustics lab, performance hall, research lab and recording facility.

About 50 members of Hamilton’s film, music, theatre and design communities were on hand to experience the performance.

“The LIVELab represents the perfect intersection of art and science,” says Laurel Trainor, director of the McMaster Institute for Music & the Mind and professor in the department of Psychology, Neuroscience and Behaviour. “This facility is a tremendous resource for the arts community and is one more way that McMaster can add value and build partnerships with creative professionals and entrepreneurs in Hamilton.”

The lab’s technology includes dozens of microphones and speakers in its specially-constructed walls and ceiling that can change the acoustics in an instant, turning the theatre into a virtual subway platform, noisy restaurant or world class concert hall.

Seats within the concert hall are designed so audience members can be wired to monitor their brain activity, heart rate, and breathing rate as they listen to live performances or watch images played on a large video wall. Motion capture technology can also be used to analyze how musicians and dancers, and even audience members, coordinate their movements.

“This facility has the capability to capture true emotional responses of audiences, enabling performers to measure the impact of their work,” says Trainor. “There isn’t another performance or recording facility in the world that can provide artists with this kind of empirical feedback.”

Research in the LIVELab is aimed both at theoretical understanding and applications to business, health, education public policy, and artistic creation. Learn more.