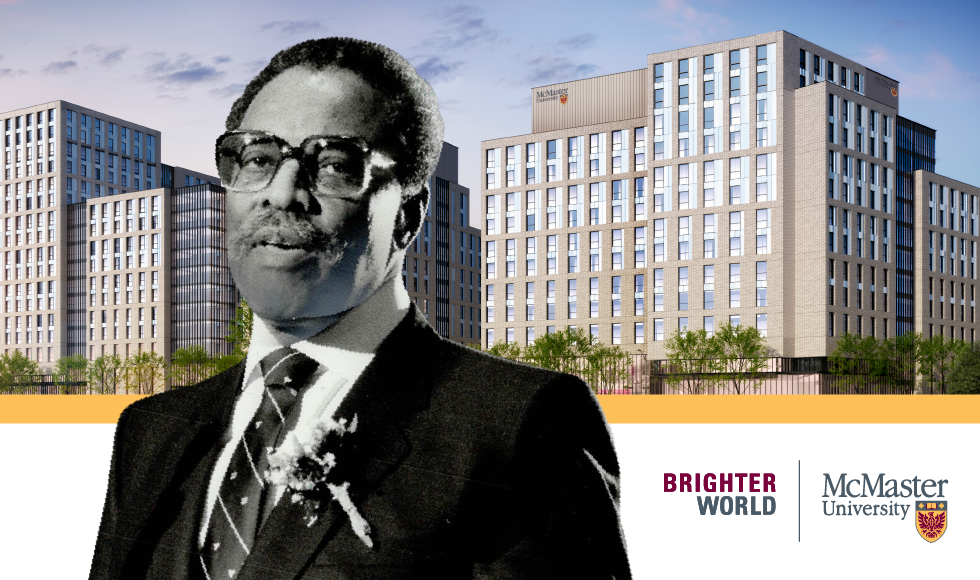 McMaster University is naming its new student residence after Lincoln Alexander, a role model for his trailblazing leadership, passion for education and advocacy for equity, diversity and inclusion.

McMaster University is naming its new student residence after the late Lincoln Alexander, a McMaster graduate who was an advocate for education and an activist for racial equity in Canada.

“Lincoln Alexander is an exemplary role model for all McMaster students because of his trailblazing leadership, passion for education and legacy as an advocate for equity, diversity and inclusion,” said Sean Van Koughnett, associate vice-president and dean of students at McMaster University.

“Once open, Lincoln Alexander Hall will welcome the brightest minds from across Canada and around the world to a new home that is part of McMaster’s campus and a vibrant neighbourhood.”

Alexander was a McMaster graduate, earning a BA in history and political economy in 1949, followed by a law degree from Osgoode Hall in Toronto.

In 1985, he became Ontario’s first Black lieutenant-governor. He was also the longest-serving chancellor of the University of Guelph, from 1991 to 2007. He was inducted into McMaster’s Alumni Gallery in 1993.

Alexander was not only named the “Greatest Hamiltonian of All Time,” he received dozens of honours including appointments to the Order of Canada, the Order of Ontario and the National Order of the Lion from Senegal. He has also received six honorary degrees, including an honorary doctorate from McMaster.

“Throughout his decorated career, Lincoln achieved many pioneering firsts. His devotion to education, his kindness, his generosity of spirit, his love for family and for all Canadians across the country, is irrefutable,” said his widow, Marni Beal-Alexander.

“I know Lincoln would be incredibly proud, honoured and at the same time, humbled that this new student residence will bear his name.”

Once open, the 1,366-bed facility will be a part of the university’s residence community. Lincoln Alexander Hall will feature a fitness centre, a dining hall, quiet study spaces, and communal kitchens on every floor.

The residence will have an interior green space, underground car parking and ample bicycle parking. Most of the building will be ten stories in height, with a 15-story tower at the southwest corner. The new residence’s location on Main Street West, between Forsyth and Dalewood, is a short walk to classes for students and close to the planned Light Rail Transit hub.

“Residence life offers students a chance to form long-lasting bonds with peers from diverse backgrounds, origins, academic interests and worldviews in a safe, high-quality environment,” said Simranjeet Singh, president of McMaster Students Union. “My residence experience was integral to my journey at McMaster and I am hopeful future students will have positive interactions, build community and grow as people in the new Lincoln Alexander Hall.”

As a leader in aging research, McMaster’s newest residence will also include a space designed to encourage students and older adults from the community to socialize and learn together.

This intergenerational hub will be hosted by the McMaster Institute for Research on Aging (MIRA) and co-designed with feedback from both older adults and students.

Construction updates can be found on the project webpage. The project is being constructed and financed through a public-private partnership with Knightstone Capital Management, which specializes in developing academic residences. McMaster’s 10 Bay Graduate Residence in downtown Hamilton is also being developed with the same partners.

Based on current enrolment trends, the additional beds within Lincoln Alexander Hall should allow McMaster to offer a first-year residence guarantee.

Lincoln Alexander Hall will open in the fall of 2026.