Large-scale map offers insights into the Battle of Vimy Ridge 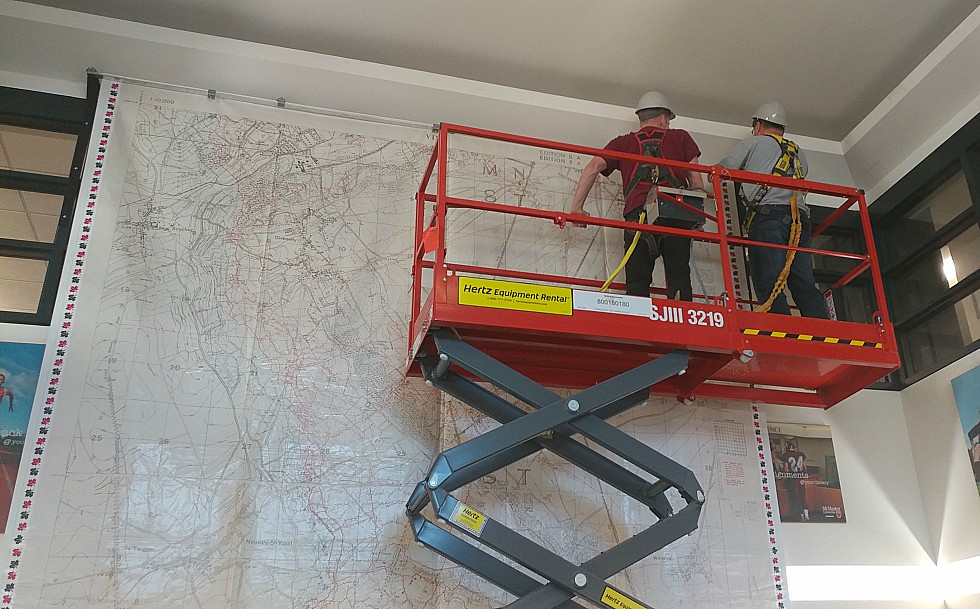 Workers install a 17 ft. by 13 ft. large scale map of Vimy Ridge in the foyer of Mills Library where it is currently on display. The map was created by Canadian Geographic using trench maps from McMaster’s extensive WWI collection and is available on loan to schools across Canada to help teach students about the Battle of Vimy Ridge.

On April 9, 1917, after months of careful preparation, the Canadian Corps was ordered to seize Vimy Ridge.

The three-day battle that followed proved to be a decisive victory for the Canadians. It was the largest territorial advance of any Allied force up to that point in the war, and came to be considered by many a defining moment in Canada’s evolution from British dominion to independent nation, but it came at a terrible cost with more than 10,500 Canadian soldiers left dead or wounded.

The Floor map, along with a suite of related learning activities, is available on loan to educators across Canada. Visit Canadian Geographic for details.

The 17 ft. by 13 ft. map – currently on display in the foyer of Mills Library – was created by Canadian Geographic and is available on loan to schools across Canada to help teach students about World War One and the Battle of Vimy Ridge.

“Every high school student in the country learns about Canada’s role in both World Wars – I’m so glad maps from our collection can help support their learning,” says Gord Beck, a map specialist in McMaster University Library’s Lloyd Reed Map Collection who worked with Canadian Geographic to source the maps used in the project.

Beck says the floor map is actually made up of two maps – one depicting the northern portion of the area in which the Battle of Vimy Ridge took place, the other depicting the southern portion. Both maps were drawn just months before the battle and would have provided military planners and soldiers with the most detailed and accurate information available at the time.

Canadian Geographic cartographer Chris Brackley digitally pieced the maps together to provide a complete picture of the battlefield.

“It gives students a real grasp of the sheer enormity and impact of the battle,” says Beck adding that the floor map allows students to see a wealth of detail including the location of machine gun posts and barbed wire, the position of enemy guns, the configuration of the trenches, the locations of underground tunnels, and the contours of the ridge itself.

Beck says the map is also a valuable tool for exploring the science of map making, which was changing rapidly during the first world war as a result of technological advances like the use of aerial photography. He says it even sheds light on the social and popular culture influences of the time.

“You can see from the map that many of the names given to the trenches are humourous – sometimes darkly humourous – and they were sometimes named after popular songs from the time, or after actresses or actors,” he says. “So, you can learn a lot more than military history from the map.”

Beck says McMaster’s collection of WWI trench maps and WWI aerial photographs are among the best in the world, adding that what makes the collection unique is that the maps have been digitized and are available online through the Library’s Digital Archive.

“When you digitize materials, you hope you’re going to increase the use of the maps and create awareness of the collections we have,” says Beck, adding that Canadian Geographic contacted him after finding the maps of Vimy Ridge online. “I’m happy that not only can the public go to our website and see the maps of Vimy, they can also look at any of the WWI maps from our collection.”

The Vimy Ridge floor map is one of a number of educational materials that were created as part of Canadian Geographic’s documentary series, Drawn to Victory, which explored the role of aerial photography and cartography in WWI.

Watch videos of Beck and McMaster’s Book and Paper Conservator, Audrie Schell – both interviewed for Drawn to Victory. Beck discusses McMaster’s collection of WWI trench maps and Schell talks about the efforts that go into preserving these materials.