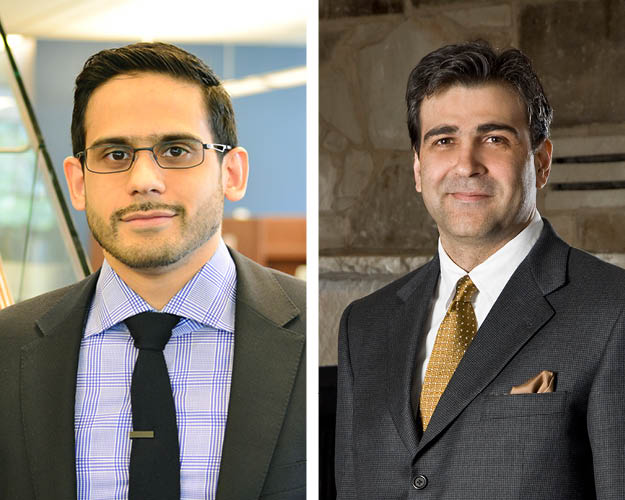 'This study shows that surgery should not be the initial option for middle-aged or older patients, as there is limited evidence supporting partial meniscectomy surgery for meniscus tears,' said Dr. Moin Khan (left), principal investigator of the study. Dr. Mohit Bhandari (right) served as co-investigator.

According to a pair of McMaster researchers, a common knee surgery may not be beneficial and should be done less often.

The team’s latest study, published in the Canadian Medical Association Journal (CMAJ) on Monday, says middle-aged or older patients with mild or no osteoarthritis of the knee may not benefit from the procedure of arthroscopic knee surgery.

Each year, more than four million such keyhole surgeries are performed worldwide for degenerative meniscus tears.

Doctors need to be carefully weighing the costs and benefits when deciding who should undergo such surgery, said Dr. Moin Khan, principal investigator for the study and research fellow in orthopedic surgery in the Michael G. DeGroote School of Medicine.

“This study shows that surgery should not be the initial option for middle-aged or older patients, as there is limited evidence supporting partial meniscectomy surgery for meniscus tears,” said Khan. “Other treatments should be used first.”

The meta-analysis review evaluated seven published randomized control trials between 1946 and 2014 on the success of arthroscopic partial meniscectomy in patients with no to mild osteoarthritis compared to non-operative treatments. The sample total was 811 knees in 805 patients with a mean age of 56 years.

In four trials, there was no short-term pain relief in the first six months after surgery for patients with some osteoarthritis; nor was there improvement in long-term function up to two years later in five trials.

The operation had become popular because as people age, the meniscus in the knee thins and becomes less flexible and more susceptible to tearing, causing pain and mechanical issues. This surgical procedure involves making small incisions to remove the torn fragments from the damaged meniscus. Although the surgery is minimally invasive, there may still be complications.

Previous studies showed that for patients with severe knee arthritis, arthroscopic knee surgery is not effective for long-term symptom relief.

“Arthroscopic debridement or washout of knee osteoarthritis has come under lots of scrutiny based upon trials that suggest patients get no benefit from the procedure,” said Bhandari. “We’re concerned that many surgeons worldwide may still be doing this procedure.”