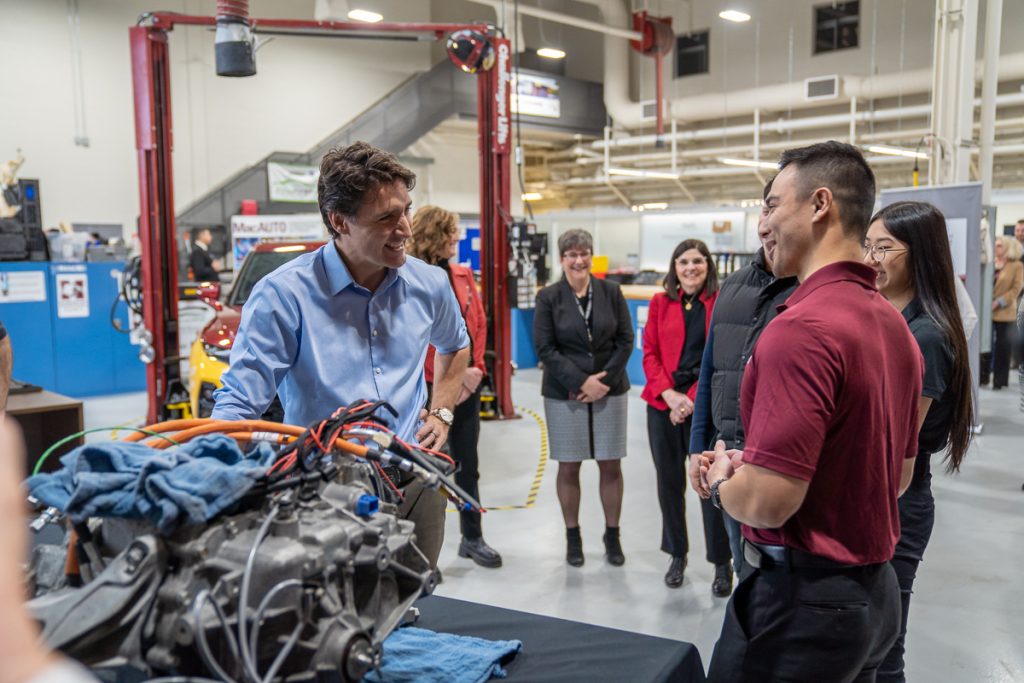 PM Trudeau and student researchers smile as they talk in the McMaster Automotive Resource Centre.

Everyone knows research is important, but there’s no affirmation like having the Prime Minister of Canada visit to see what you’re doing to move the country forward.

Such was the case Wednesday morning when Justin Trudeau visited the McMaster Automotive Resource Centre (MARC) and the neighboring McMaster Manufacturing Research Institute.

Members of the Liberal cabinet joined the prime minister after Trudeau had chatted with faculty and student researchers at McMaster Innovation Park, the research, commercialization and advanced manufacturing hub on Longwood Road South.

McMaster President David Farrar greeted the prime minister Wednesday and the two spent a few minutes together before the prime minister’s lab tour, where they talked mainly about electrified vehicles and biomanufacturing, two key McMaster priorities.

“Our innovation park is really going to change this region. We are going to drive innovation in this part of the world, and this was an amazing opportunity to be able to talk to him about that,” Farrar said later.

McMaster Provost Susan Tighe said the visit was welcome affirmation of McMaster’s contributions to research and education. She said she was especially pleased to see the prime minister spend time with student researchers during the tour.

“It’s a validation that we are doing work in the right areas, which are important not only to the research community, but also to all Canadians,” she said.

“We’re doing leading-edge work in research and in our teaching enterprise, and it’s important to have government officials learn not only how we’re using their investments, but also to see first-hand the impactful work that’s going on.”

Ali Emadi, an international leader in hybrid and electric vehicle research, led the prime minister through the MARC facilities to highlight McMaster research in the growing field of clean transportation and advanced manufacturing.

McMaster is home to the largest academic program in transportation electrification in North America. Emadi’s research group consists of about 250 undergraduate students, graduate students and staff, and he said Trudeau was deeply engaged with the researchers he met.

“He had really good questions and he was knowledgeable in this space, so we were able to go directly to what was unique and special about our setups and facilities,” said Emadi, an engineering professor and Canada Excellence Research Chair laureate.

“What we are doing is really important for Canada and for the world, and it was awesome to get to showcase it to him.”

Students from McMaster’s EcoCAR Challenge team showed Trudeau the production vehicles they have been modifying for greater energy efficiency – as part of an international competition with engineering students from selected North American universities.

“He was extremely engaged in what we had to say and present about sustainable transportation and electrified vehicles, and it was just a great honour to get to present our project to the prime minister,” said PhD student Niloufar Keshmiri, project manager of McMaster EcoCAR Challenge team.

“It’s been a very exciting day for all of us to show what we’re doing at MARC and to show where these projects are heading, said PhD student and MARC technology development lead Maryam Alizadeh. “We talked about the diversity that we have on our team and the goals that we have for equality, diversity and inclusion. We’re proud to say that half of our team members are women.”

Government ministers were spending their third and final day of meetings in Hamilton to prepare for the upcoming session of Parliament, creating the opportunity to visit the research hub.

Since being elected prime minister in 2015, Trudeau had previously visited McMaster twice –once in 2017 to participate in move-in day and once to host a town hall in 2018.

With files from Maureen Lawlor