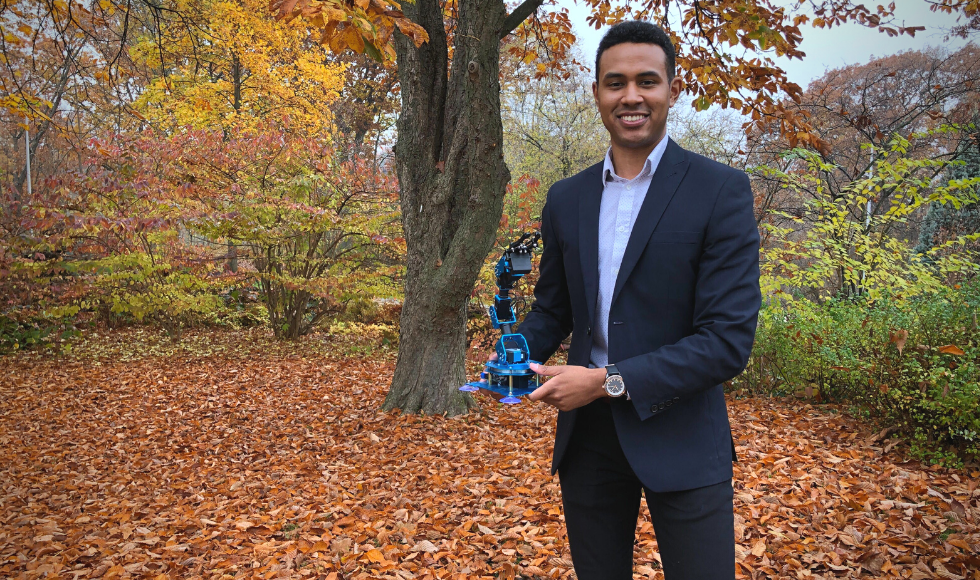 Michael Jobity, a graduate of the McMaster Engineering, Physics and Management program, is the president of Jetson Infinity, a company that offers easily programmable robotic arms that can be used for educational and prototyping purposes.

As we mark Global Entrepreneurship Week at McMaster, we are highlighting the innovative thinkers working to turn ideas into reality. Stay tuned to Daily News all week long as we share stories of McMaster community members whose entrepreneurial skills are making real-world impact.

Much of what you need to know about the robotic arm Michael Jobity launched can be learned from his company’s name – Jetson Infinity.

It’s futuristic, much like The Jetsons, the 1960s animated TV sitcom set in 2062 (complete with flying cars, innovative gadgets and robotic contraptions.)

And its applications are infinite.

Need an automated electric vehicle to charge? Why not build a demo with the robotic arm that could show how robotics could be used to connect the car to the charging port?

Have some other futuristic problem? Jobity says whether you are a school-aged child, new to the world of coding, or an expert, Jetson Infinity and its robotic arm can help you find a solution.

“Essentially, it’s a general purpose robotic arm that can be used for a multitude of different applications,” says Jobity. “You basically plug it into your laptop, and then you’re good to go.”

It uses python, a general purpose and universally accepted programming language that is well suited for those learning to code, says the entrepreneur.

The graduate of the McMaster Engineering, Physics and Management program created the robotic arm product line in response to a growing demand for educational tools to help children learn coding and develop engineering skills.

Once a student has the robotic arm, they can plug it into their laptop, download apps — or make their own app — and use that robotic arm to start to solve day-to-day problems.

Beyond just providing the arm, Jetson Infinity works with clients to help implement it into existing curriculum, or to collaboratively develop educational modules where the arm can be used in control systems, coding algorithms, creative design and robotics.

Jobity points to one of these collaboration as a moment where he realized the global impact the robotic arm could have.

Jetson Infinity is working with Arizona State University and a STEM company in South Africa to use the robotic arm to teach students in Johannesburg how to code, says Jobity.

“We have weekly meetings with a coordinator. He was talking about smart cities, how Johannesburg is focusing on smart cities and how they’re trying to alleviate traffic,” says Jobity.

“I was like, ‘oh my gosh, these are real world issues that he’s describing. And we’re going to be able to teach these kids and actually open up a challenge for them where at the end they can use their knowledge and apply it to a problem that’s prevalent within their city.’”

The innovation, which mechanically tunes the pegs of a guitar, grew out of a final year capstone project the then engineering physics student tackled with a group of his peers.

2unify even landed the group on the Canadian version of the reality show Dragons’ Den, where entrepreneurs pitch their ideas to a group of venture capitalists in the hope of securing business financing and partnerships.

Jobity says the memorable experience proved to him the value of the business skills he acquired during his time at McMaster — especially from the support the group received from The Forge, a McMaster-funded business incubator.

“They gave us a standing ovation after our pitch. So, it was really great,” says Jobity.

Jobity returned to The Forge for support in growing Jetson Infinity and says the team has been instrumental in guiding the company, from navigating manufacturing issues, to developing patents, to gaining storytelling skills.

“The network and the resources are really strong. And they’re really big on supporting young entrepreneurs,” says Jobity. “I’m really thankful for all that The Forge does.”

Adding to the toolset

Jetson Infinity’s robotic arm is in 15 schools in the U.S., and in use at three universities and five companies, says Jobity. He hopes to see that total number grow to 100 in a year.

He says he sees a great potential for growth as more education funding gets dedicated to STEM (science, technology, engineering and mathematics). He also likes the idea of waiting to see what a new generation of thinkers comes up with.

“My ultimate goal is to have a student develop some revolutionary technology,” says Jobity. “And when they’re asked, ‘so when did you become inspired by this?’ They’ll say, “Oh, I had a Jetson infinity arm.’”

Revolutionary technology aside — the young entrepreneur says the primary goal is to give students a tool that will reduce barriers to the world of tech.

“It’s helping students just add another resource to their toolset,” says Jobity. “You have a ruler, a pencil case, a textbook, a robotic arm right? It sounds kind of funny, but I think it’s creating a pretty exciting future.”