“It was so much more than reducing IT waste” 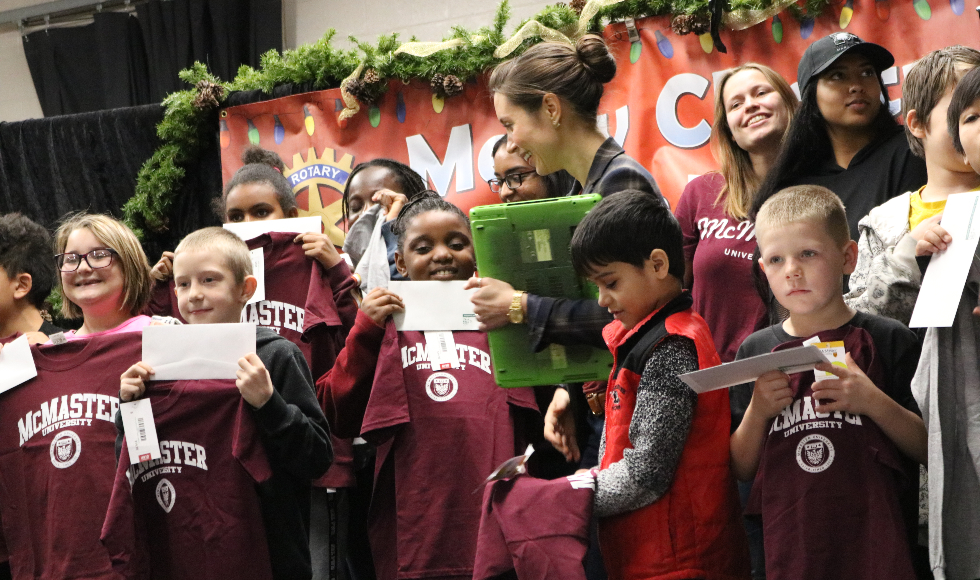 “I am so grateful to be provided with the computer from GreenBYTE and McMaster University, it will be so helpful as I further my education in High School, it will really make a difference. Thank you to everyone who made this possible.”

This was a comment that a group of six McMaster students received from a grade eight student when they delivered refurbished computers to Cathy Wever Elementary School last Thursday.

“When I selected this project on the first day, I wasn’t sure if we would be able to achieve the results we wanted in less than three months,” says Shanmugam.

“Once we started working together, I realized that with the care and commitment of the student team members and the guidance, expertise, and connections provided by our community project champions we were well-positioned to make this happen!”

To help coordinate the project and collect the computers, the students worked in collaboration with a number of campus partners, including Craig MacDonald from McMaster’s Facility Services, Richard Godsmark from University Technology Services (UTS), Kate Whalen from the Academic Sustainability Programs Office, and Ryan Johnson from the St. Leonard’s Society of Hamilton greenBYTE.

“We learned so much from the people we spoke with — we learned about data security concerns, that there is a scheduled lifecycle for when departments decommission their computers, and about the various methods to effectively communicate with staff, faculty, and students,” said Logeais.

“We used the information from our consultations to create a webpage on the Facility Services website, which included a section for frequently asked questions where we addressed issues such as hard drive sanitization,” said Janatyani.

Others developed a simple process for device donation.

“The process we came up with included the addition of an online form, so that staff members could request device pick-up by Facility Services, just like they do for other work orders. We also made sure to include an effective system for removing hard drives and having them sanitized by UTS before being re-installed into the computers,” said Saini.

The group also hosted collection events for staff, faculty and students to drop off their devices.

In the end, more 100 computers were collected, with more than 70 devices donated to greenBYTE for local kids. Even the devices not donated to Cathy Wever students had lots of potential, so the group created another donation stream that would support McMaster students.

The group also realized that, while their initial focus had been on waste diversion, their project went a lot further.

“We had a goal to get 100 computers, and we were really focused on that. But then, when we got to the school and talked to the kids, we realized that this project was about so much more than reducing IT waste. It was really about community coming together in collaboration and addressing the problems that really matter,” says Shanmugam. In total, the Trash to Treasure pilot project made a real difference:

To learn more about the 15 SUSTAIN 3S03 student projects and other sustainability initiatives, check out the Academic Sustaibaility Programs Office’s 2019 Course Report and follow MacSustain on Facebook and Instagram.