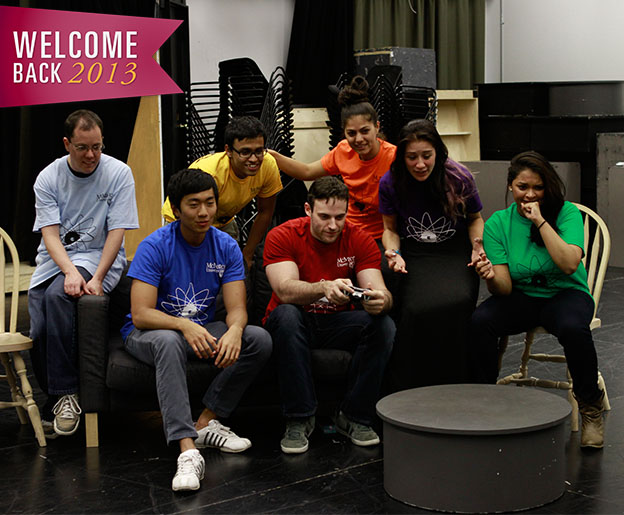 IRIS, an annual Welcome Week theatrical production, is created by a team of upper-year students who improvise, write, direct, stage manage, produce and perform just about everything.

Over the next week, some 4,000 incoming McMaster students will be introduced to IRIS.

An acronym for “Inspiration, Reflection, Integrity, Success,” IRIS is McMaster’s theatrical production for first-year students, performed every year during Welcome Week. This year marks the 10th production of the one-hour multimedia show, which inspires new students to make a successful transition to university life.

IRIS is unique in that it is integrated into McMaster’s academic curriculum. “Over the past four years, we’ve established a strong partnership with the School of the Arts,” said Michele Corbeil, program coordinator in McMaster’s Student Success Centre, who launched IRIS in 2004. “Theatre engages students not just by watching it, but by creating it. It’s an incredible leadership opportunity.”

Catherine Graham, associate professor in the Theatre & Film Studies program, also serves as academic advisor to IRIS. Her area of research focuses on how to get new voices into public discussion, she explains. “I’m not only interested in the script. I’m interested in how you set up workshop processes. How do you allow people to convey their experience of first year?”

IRIS is created by a team of upper-year students, who improvise, write, direct, stage manage, produce and perform. Broad themes and issues are brainstormed in creative workshops held in April and May — a process that involves students, faculty and staff members from across multiple units and departments. The student actors then take the skeleton script and flesh out the characters, scenes and dialogue during the summer rehearsal process.

The goal of the play is to encourage first-year students to make good choices, ask for help, take initiative and get involved.

“There will be times when you will fall, but here’s how you can pick yourself up,” explained Taryn Crankshaw, the show’s dramaturge and co-director. Now entering fourth year, Crankshaw is the second student to receive an Undergraduate Student Research Award to work on an IRIS production. Her research project explores how to portray student success through theatrical performance. (Read about her research here).

The student thespians, who hail from many different areas of study, are each responsible for writing a monologue based on their own experiences. No topic is off-limits — from stress to social skills to sexual orientation.

Rex Jackson performed in last year’s IRIS. “I talked about being transgender and what it was like to make the transition as a first-year music student at McMaster. It was an adventure.” In fact, last year’s show was the first time he performed in public as a male. “It felt great,” said Jackson. “I’ve never been accepted the way I have been at McMaster.” He is back in the cast this year and entering his third year, studying Music and Theatre & Film Studies.

“It’s been a very positive experience,” said Joana Fejzaj, a first-time cast member who is entering her fourth year at McMaster, studying Social Work, Health Studies and Gerontology. “The best part of working on IRIS is seeing a group come together, by listening to each other’s stories and struggles and successes.” Along the way, she’s had to juggle a summer job and a class in addition to rehearsals for IRIS. “It’s worth it, definitely,” said Fejzaj. “Our small group will have such an impact on the thousands of people who will see the show.”

This year, as an added bonus, IRIS will extend into the full academic year.

“We’re experimenting with having students conduct workshops throughout the school year,” said Catherine Graham, who teaches a Performance and Community Outreach course. “It’s great experience to learn how to make this kind of theatre based on links to a community, as opposed to a pre-scripted document.”

Funding has been received from McMaster’s Forward with Integrity initiative to document and analyze this pilot project. The end result will be the creation of new scenes for next year’s production of IRIS. “Our hope is this will become an ongoing cycle,” said Graham. “Somebody once said that IRIS is like a vaccination. At the time, it doesn’t appear to do anything. But it primes your system, so when a problem comes at you later on, you know how to respond.”

This year’s performances of IRIS will take place during Welcome Week, from Aug. 30 to Sept. 4.

A preview show for members of the McMaster community will take place on Friday, Aug. 30, at 3:30 p.m. in MDCL 1305. A special community performance will also be presented on Wednesday, Sept. 4, at 12 p.m. in Robinson Memorial Theatre. Guests are asked to arrive 15 minutes before show time.