If whitefish can stand some heat, we can keep them in the kitchen 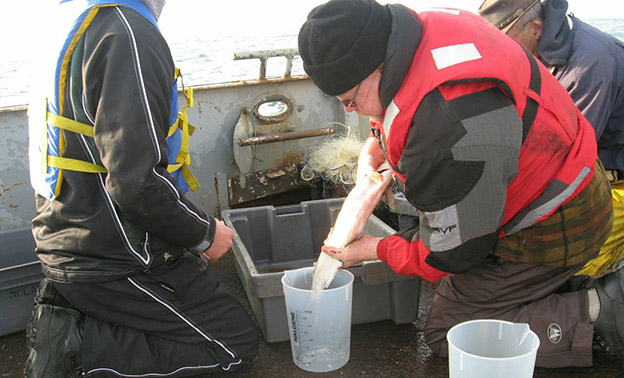 Whitefish embryos are collected on-board a trawler. The embryos are brought back to campus for analysis, and returned to the lake in time for spring hatching.

Waiting patiently by the phone for the call indicating the weather is calm enough to take the trawler out on Lake Huron.

It’s not the typical way for students to close out the year.

But it’s the best way for Joanna Wilson’s team to get its hands on lake whitefish – or more specifically, their embryos.

Wilson, a biology professor, is in the second year of a five-year, million-dollar project that looks at the impact of environmental stressors on whitefish spawning habits.

Together with the University of Regina and with funding from Bruce Power, Wilson is trying to find out whether things like warming water temperatures have an effect on the growth of the commercially important fish.

Bruce Power, which operates a nuclear generating station on Lake Huron, discharges water into the lake that’s between two and four degrees warmer than what’s natural.

The water is also slowly warming due to climate change.

To gather the embryos, students in her lab head out onto Lake Huron in the late fall.

Last year, the team travelled on an ice-breaker.

They harvest the embryos on-board the trawler, bring the eggs back to the lab for analysis, and then return them to the lake in the spring, in time for hatching.

So far, Wilson’s team has only found minimal changes to heart and metabolic rates. But if temperature changes do affect the fish, the commercial industry could be impacted.

The team is also looking at round whitefish, which are typically not eaten but appear to be more sensitive to environmental stressors.