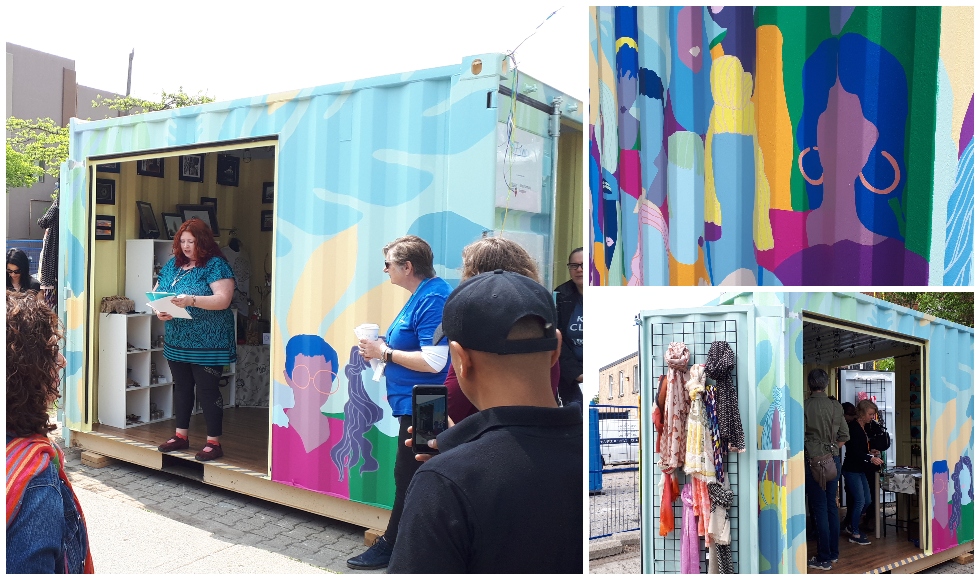 Images taken at the launch of the Business Out of The Box, an innovative pilot project created in collaboration with the YWCA Hamilton, McMaster's Office of Community Engagement, the City of Hamilton and the Walter G. Booth School of Engineering Practice and Technology. The initiative aims to test how a re-purposed shipping container could be used by local women as a low-cost way to develop their small retail businesses. The box, located at 414 Barton Street East at St. Matthews House, launched on June 1. Photos by: Alyssa Lai.

Now, just eight months later, they have successfully completed a unique thesis project which has not only provided them with valuable, real-world experience, but is also helping to make a difference for women entrepreneurs in the Hamilton community.

Pourkeveh, Sarhadi and Haghshenas are part of a team of McMaster and community partners that collaborated on Business Out of The Box – an innovative pilot project, launched on June 1, that aims to test how a re-purposed shipping container could be used by local women as a low-cost way to develop their small retail businesses.

The pilot project – funded through an Ontario Trillium Foundation grant – was led by the YWCA Hamilton in partnership with McMaster’s Office of Community Engagement and the City of Hamilton. The students – all from the Walter G. Booth School of Engineering Practice and Technology – designed the interior and exterior of the box, which is providing space for 13 women to launch their businesses as part of the Women’s Entrepreneur Collective, a YWCA initiative.

“We were looking for a project where we could learn about the different steps in the building process,” says Pourkeveh. “Where we could design and learn about fabrication, and also work with contractors and community organizations like the City to learn how things work in Ontario. But when we saw that we would also be contributing to a project that could help women and newcomer entrepreneurs achieve their goals, we were excited to do that.”

Over the span of several months, Pourkeveh, Sarhadi and Haghshenas worked closely with the YWCA and LeafBox Concepts to create and model a design that would meet the needs of entrepreneurs using the container.

They learned about and navigated the process of obtaining permits with the City, developed a budget for the project, and performed a cost analysis for the solar panels that power the container. They also helped secure contractors and vendors, and even pitched in during the construction process to help control costs.

“It was amazing because it was all about working in the real-world,” says Sarhadi. “We got to do everything; design, project managing, construction – whatever we wanted to try we had the chance to experience with on this project.  And we would like to grow this idea to help the community around Hamilton, starting with McMaster University itself.”

But they also encountered a number of challenges. Early in the project, they learned that they would be unable to get a permit for the planned 20 ft. x 8 ft. container, forcing them to significantly reduce the size of the box to 10 ft. x 8 ft. and re-think their design.

Although this and other set-backs were frustrating at times, the students agree the process taught them some valuable lessons.

“There were many changes during the project,” says Haghshenas. “There were limitations with the City in terms of permits, and budget limitations. But it taught us how important it is to do our job in a way that we can be flexible and adjust to changes.”

Robert Fleisig, an associate professor in the W Booth School of Engineering Practice who supervised Pourkeveh, Sarhadi and Haghshenas, says that in addition to honing their design thinking, project management, and problem-solving skills, the project also offered the students another, uniquely rich opportunity: the chance to learn how to collaborate with community.

“Part of working with community partners is understanding that they have knowledge and experiences that are different from ours,” says Fleisig, “The goal here was to support women and women immigrants as entrepreneurs, it wasn’t to build a box. So, the students had to listen to community and understand what was meaningful to them. That empathy piece is part of their learning – they’re meeting someone else’s needs, not simply meeting a specific set of building requirements.”

Business Out of The Box was developed after a member of the Hamilton community brought the idea to McMaster’s Office of Community Engagement (OCE).

The OCE – which brings together campus and community partners to collaborate on projects and initiatives that contribute to the public good – reached out to the W. Booth School of Engineering Practice, among other campus partners, then collaborated with the YWCA and the City of Hamilton to secure funding for the retrofit.

From there, the YWCA led the project, bringing together a number of additional partners including, LeafBox Concepts which managed the construction process, and St. Matthew’s House which provided the location for the box. Local artists were also commissioned to paint the exterior of the container.

Maisie Raymond-Brown, the YWCA’s director of Training and Employment Services says Pourkeveh, Sarhadi and Haghshenas’ contribution to the project was critical and, together with the efforts of all the partners involved, is having a meaningful impact on women in the Hamilton community.

“It is very important for YWCA Hamilton to work with partners like McMaster to make a difference in the community and in particular in the lives of women and girls,” says Raymond-Brown.

“This collaboration provides opportunities for the women who will be vendors in the Box that they would not have normally,” she continues. “They are able to launch their businesses in a space that is free to them and with the assistance of a Business Coach to guide them in the process and with the additional support of mentors.  Working as a collective helps the women to develop strong networking skills and a supportive spirit that will serve to enhance their business.”

Business out of The Box was officially launched on June 1 and is located at 414 Barton Street East at St. Matthew’s House in the heart of Barton Village.