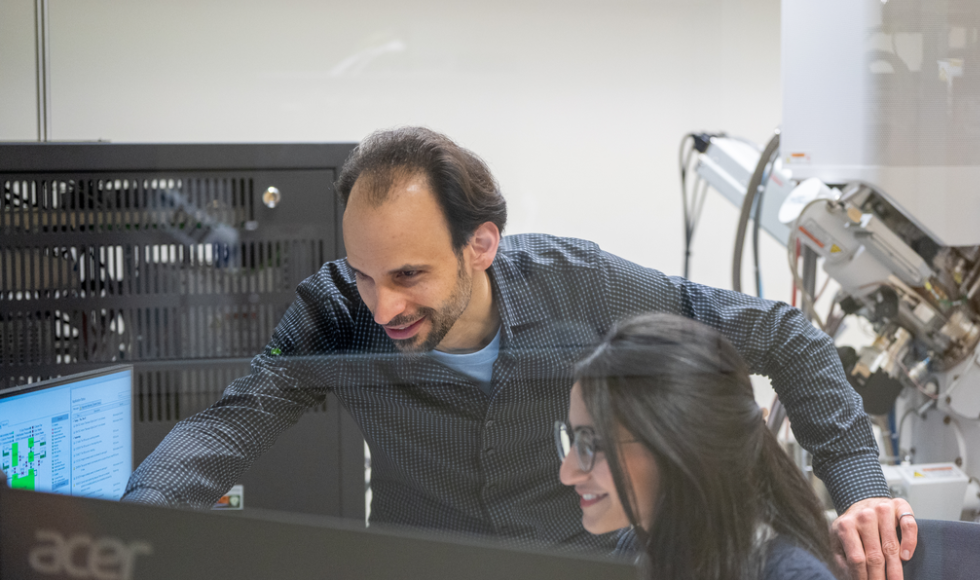 Travis Casagrande and Sabaa Rashid, research associates at the Canadian Centre for Electron Microscopy (CCEM), together created a McMaster holiday greeting at the millimetre and nanometre scale that was featured in our holiday video. (Photo by Kayla Da Silva/Mcmaster University).

In reflecting on the past year at McMaster, we wanted to celebrate the small moments in our community that, together, created a big impact. And so, we called on our friends at the Canadian Centre for Electron Microscopy (CCEM) — since researchers there know a thing or two about the really tiny things that have the power to shape and transform.

Using two of CCEM’s 18 best-in-class electron and ion microscopes, Research Associates Travis Casagrande and Sabaa Rashid together successfully created the world’s tiniest McMaster holiday greeting. And when we say tiny – we mean tiny – think from the millimetre scale down to the nanometre scale.

You can see their work featured in our year-end holiday video here.

Watch above: Travis Casagrande and Sabaa Rashid, research associates at CCEM, describe how they created the holiday greeting that features intricate details at the nanometre scale.

To start, Casagrande got to work creating a string of text reading, ‘here’s to the new year!’

Using a femtosecond laser — which allows a user to work in the scale of hundreds of micrometres all the way up to a few millimetres — Casagrande used computer-aided (CAD) software to instruct the laser to blast around the text, leaving behind the block letters.

The result? A teeny tiny holiday greeting that is about eight millimetres long, and letters that stand about 0.4 millimetres tall.

“And I could go smaller or bigger. I wanted this to be really tiny, but also big enough that you can see it with the cameras,” says Casagrande.

The researcher says it took some trial and error to land on a material that would work for the project.

“We did some testing with silicon wafers as well as glass cover slips and settled on aluminum foil,” says Casagrande. “It ended up being a lot more resilient.”

Casagrande, who in 2019 put his skills to the test creating the world’s tiniest gingerbread house, says this most recent project — while not without its challenges — was a fulfilling venture.

“This project is a little bit different from what we normally do,” says Casagrande, “but it’s always interesting to do different things and figure out where the microscope’s limitations are.”

Once that stage of the project was complete, Casagrande passed the text onto Rashid, who would take the tiny greeting down to the nanometre scale using an instrument containing both a focused ion beam and a scanning electron microscope.

“You have both beams within one instrument, which enables you to machine or mill material away or etch it or carve or engrave,” says Rashid. “And at the same time, you can see what the focused ion beam is doing with a scanning electron microscope at the nanoscale.”

Rashid focused on a branch of the letter n at the centre of the string of text.

“We zoomed in there and we deposited a pad to planarize the surface and make it flat,” says Rashid. “Then we milled or carved or engraved the logos of McMaster University and a few flakes on this pad with the focused ion beam.”

“Some of the text there is a thousand times smaller than human hair.”

Rashid echoes Casagrande in saying the project was an opportunity to get creative, and also learn more.

“Sometimes we get some projects where we’ve never done it before, so we have to kind of come up with a new process to develop the way to deal with that sample and the preparation for it,” says Rashid. “It’s fun.”