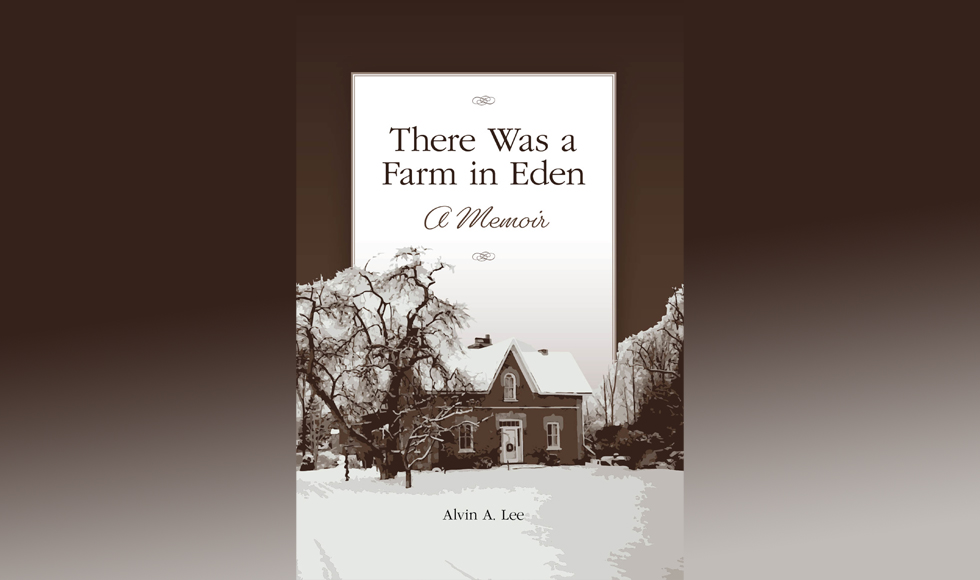 Alvin Lee's memoir, There Was a Farm in Eden, looks back on 90 years of family and leadership.

On October 1, 1930, McMaster held its first classes in Hamilton, having decided three years earlier to move to the “Ambitious City” from Toronto.

The evening before that, a baby boy was born in a little farmhouse close to Lindsay, Ontario.

While the university and the baby almost shared a birthday, they would become much more connected as the years went on.

The baby boy, Alvin Lee, came to McMaster in 1960 as an assistant professor of English, and went on to establish a significant academic and administrative career, serving as McMaster’s president from 1980 to 1990.

Now, both the president and the university are celebrating their 90th birthdays.

To mark the occasion, Lee has just published his memoir, There Was a Farm in Eden, which tells the story of both his family life – he and his late wife Hope had five daughters and nine grandchildren – and his academic career, one in which he became a university teacher and administrator and a specialist on Old English poetry, as well as on the works of Northrop Frye.

We chatted with Alvin Lee in the week before his birthday.

What was the impetus to write your memoirs?

I’ve been given longer to live than most people. I’m in good health and I have my wits about me, so I decided to try to make sense of my nine decades and share this with others.

I’ve been thinking back, refreshing my memories, and trying to put them together in a meaningful pattern, from life with my birth family to the family my wife and I created, to my professional life in higher education, which included 22 years in senior administration, 10 of those as president and vice-chancellor.

You and McMaster are certainly connected – even your birthdays are only a day apart!

I was born on a farm near Lindsay just as classes started at McMaster in Hamilton – and 30 years later, in 1960, I started there as a professor of English. I chose McMaster because it looked like a very respectable Canadian university that was about to get a lot better fast. Hope and I wanted to be part of that.

Universities are primarily houses of intellect. It’s what’s going on in people’s minds and imaginations day by day that makes or breaks them. McMaster is a house of intellect still – there’s enormous imaginative and intellectual energy at work here every day.

What’s changed since you were young?

Well, the most obvious thing is that universities are much more prominent in society than they were when I was a boy, or even going to university. In 1949 I was one of two in my high school class of 30 at Lindsay Collegiate who went to university.

Now, more than half the Canadian population has a postsecondary education. This is a great democratization of education, and I admire that, on the whole, though it also leaves problems, such as large numbers of people not equipped to deal critically with their existence in a complex world.

What do you see as your legacy, as a teacher, researcher and administrator?

I was an enthusiastic, committed teacher, especially in the early and late parts of my career (I even received the President’s Award for Excellence in Teaching – after I was president!)

I’ve written important scholarly books, including one published by Yale and one by U of T, on Old English poetry, and I was the general editor of the 30-volume Collected Works of Northrop Frye.

I had a lot to do with the staffing at McMaster – helping to choose new faculty members, monitoring and helping their development, their tenure, their promotion. I was intimately involved with building the academic faculty strength each year for most of two decades.

I worked with President Thode, then President Bourns, in the whole University but especially in helping develop the arts areas of the University.  McMaster had achieved international distinction in the physical sciences and by the time I came along in the 60s there was an institutional push to develop comparable strengths in arts. We brought that a long way. As the medical school started to emerge in the 60s, I also worked with John Evans and Fraser Mustard and their colleagues to help that magnificent creation become a reality.

So I see my legacy as teaching, scholarship, and helping build the academic vitals of the University.

What are you thinking as you approach your 90th birthday?

There are so many incomplete things in your past – you touch an enormous range of subjects and only know a slight bit about most of them, and you wish you knew more.

There are pluses to being in strict quarantine, as I am right now. I’m pole-hiking daily, I can listen to the birds, I measure the breezes and watch the creek levels go up and down. I notice a range of things I hadn’t noticed before. I garden and I read a lot.

What are you most proud of?

My family is number one. I had a wonderful wife who died 22 years ago.  She was a marvellous partner, a fine secondary school teacher, and chair of the Wentworth Board of Education – and the mother of five daughters!

We created a family that gives me great pleasure. We’re now lively group of 20. Life is good. My family is better to me than I probably deserve.

I’ve travelled to 68 countries over the years. In action and in what I read I think of myself as a world citizen.

And, of course, I’m proud of having served McMaster, both with my scholarship and in administration. It’s a major, established university in the Canadian scene and is making a considerable mark internationally. I’d like to think my colleagues and I had something to do with that, not so many years ago.