Graduate recognized for thesis on one of ‘hottest areas of astrophysics’ 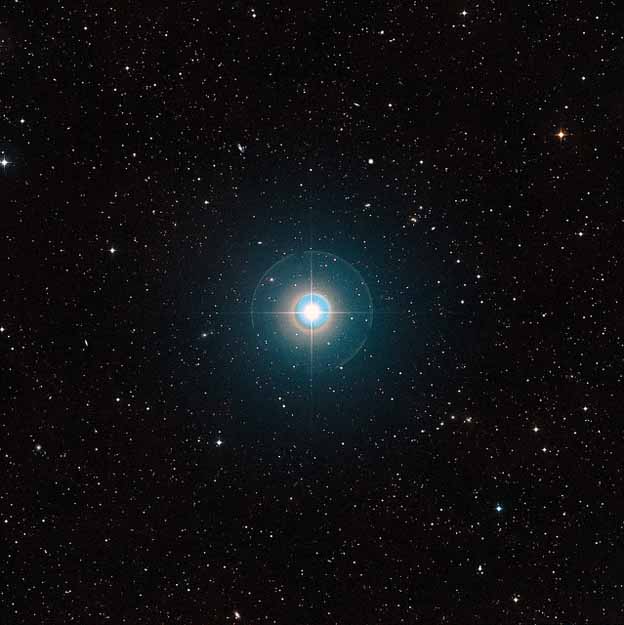 A wide-field view of the parent star of the famous exoplanet Tau Boötis b, created from the Digitized Sky Survey 2 images. The star itself, which is bright enough to be seen with the unaided eye, is at the centre. The spikes and coloured circles around it are artifacts of the telescope and photographic plate used and are not real. The exoplanet Tau Boötis b orbits very close to the star and is completely invisible in this picture.

A recent McMaster PhD recipient has been awarded one of the country’s top honours for young astronomers and astrophysicists.

Yasuhiro Hasegawa has been named the winner of the prestigious J.S. Plaskett Medal.

Hasegawa’s thesis, entitled “Planet Traps in Protoplanetary Disk and the Formation and Evolution of Planetary Systems” was carried out under the supervision of Ralph Pudritz, director of McMaster’s Origins Institute.

“The search for and theoretical understanding of extrasolar planets is one of the hottest areas of modern astrophysics,” said Pudritz. “Canada has a growing reputation in this new field, and the theoretical work in Yasuhiro’s thesis provides a new way to understand what the explosion of new data is starting to reveal about how planetary systems form.”

Extrasolar planets – or exoplanets – are those found outside the Solar System. The discovery of such planets, particularly those on which water could be found, has piqued interested in the search for extraterrestrial life.

McMaster has developed a strong reputation in this field since 2000, when it led the first authoritative decadal review (a survey of astronomy literature, produced every ten years) of relevant research.

Hasegawa is currently a fellow with the East Asian Core Observatories Association at the Academia Sinica Institute of Astronomy and Astrophysics in Taiwan.