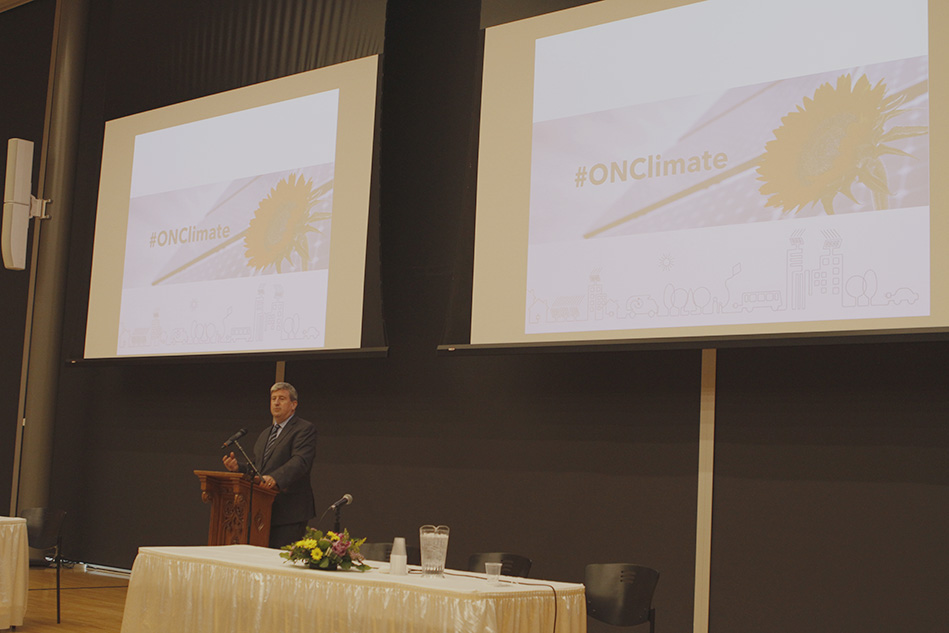 Ontario Minister of the Environment and Climate Change, Glen Murray (pictured) delivered the keynote remarks at the Low Carbon, Climate Resilient Cities Symposium, a day-long event focused on exploring ways cities can respond to the threat of climate change.

How can we move toward zero emissions? How can we restore ecosystems and keep our planet intact for future generations?

Although the problems are complex, Glen Murray, Minister of the Environment and Climate Change says there are tangible actions both cites and individuals can take to protect the environment and address the threat posed by climate change.

Murray made these remarks at the Low Carbon, Climate Resilient Cities Symposium, part of Climate Change and Environment: Navigating from Risk to Resilience (April 18-22), the final set of events in the Big Ideas, Better Cities series.

During his talk, Murray outlined the profound effect climate change is already having on food and water security, from the melting of the polar icecaps leading to unstable weather patterns to the persistent droughts in California, which are affecting the cost and supply of fresh food across North America.

“The biggest question in all of this is, what causes the tipping point of consciousness? “ says Murray. “We’re not yet having a serious enough conversation about the scale of the problem and the great irony of this is that it’s so easy to do something about- it’s how you eat, it’s how you heat and cool your home, it’s how you move. These are not hard things to do.”

Murray pointed to a number of initiatives currently underway at the province designed to help Ontarians lessen their carbon footprint including carbon pricing, the Electric Vehicle Incentive Program, (rebates on electric vehicles which were recently increased to $14,000) and subsidies for homeowners who convert their homes to geothermal, among a host of other programs.

He also outlined changes individuals can make such as using transit, riding bikes instead of driving, walking, buying local food, and finding ways to use urban or green spaces to grow food.

Murray was one of a number of speakers at the symposium, organized by Altaf Arain, Director of the McMaster Centre for Climate Change, which brought together leading researchers, municipal leaders, the businesses community, non-governmental organizations and members of government to exchange ideas and build collaborations focused on transforming cities into smart, low carbon communities.

Read Altaf Arain’s article, Cities can be leaders in the climate-change fight, recently published in the Hamilton Spectator

Climate Change and Environment: Navigating from Risk to Resilience features a range of events that explore how research can help cities respond to the threat of climate change and help build greener, more sustainable communities locally and around the world.