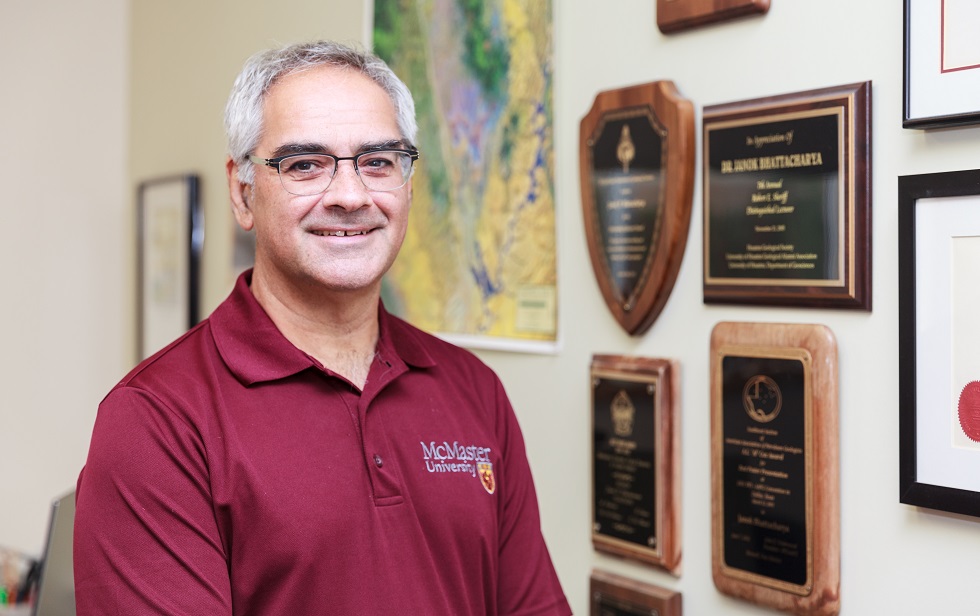 “Mac made me who I am.” Professor Janok Bhattacharya received his PhD from McMaster in 1989 and is the inaugural Susan Cunningham Research Chair in Geology. Along with his annual donations, he’s planning ahead for a gift in his will to solidify his legacy at Mac. (Photo by Sarah Janes.)

For Janok Bhattacharya, all roads have led to McMaster. Twice, in fact.

The first time was in 1984. He had been working for a few years as an explorationist in Alberta. He kept noticing that all the best geologists he was encountering were graduates of the same university: McMaster.

“I discovered Mac had the best sedimentology program in the country,” he recalls.

He also learned that the one of McMaster’s leading geologists, Roger Walker, had received his PhD at the University of Oxford, supervised by one of the world’s top geologists.

“I called Roger out of the blue, introduced myself, and said I wanted to do my graduate work with him at McMaster,” says Bhattacharya. He was accepted and received his PhD in 1989.

Second time: 2013. After a career as a senior research geologist in the private sector and then a faculty position at the University of Texas at Dallas, Bhattacharya now held a named professorship at the University of Houston. McMaster had been searching for the right person to fill a new chair, funded by Mac alumna Susan Cunningham.

“Susan and I met to talk about what the position meant to her, and to me. I agreed it would be a great opportunity — and a great honour.” He took up his new post as the inaugural Susan Cunningham Research Chair in Geology in 2013.

Bhattacharya has also served as Acting Director and Associate Director (Graduate) in the School of Geography and Earth Sciences. He now oversees a research program that investigates the complex sedimentary layering that controls fluid flow in hydrocarbon reservoirs — and how that layering records global climate and sea-level change during the warmer Cretaceous greenhouse period of Earth’s history, 90 million years ago.

A generous annual donor, Bhattacharya is also planning ahead for a gift in his will to support the continued growth and success of the earth sciences at McMaster.

Why give back to Mac? “I frequently use the skills I learned at McMaster,” he says. “If your education meant a lot to you, you can make a difference to your university by giving back.”

He points out that he also gives back in other ways — through the students he’s taught at three universities, the research he’s contributed to, and the papers he’s written.

“There’s no reason why that legacy should stop when I’m gone.”

As a Mac alumnus, donor and faculty member, Bhattacharya has a clear idea of the positive impact that philanthropy can have on higher education. He notes that smaller gifts can provide financial support for students, while larger ones help fund the workings of the university through programs, professorships and chairs, for example.

So, what’s the central core of his commitment to McMaster?

“I was trained by the best in the world,” says Bhattacharya. “Mac made me who I am.”

If you have already included a gift to McMaster University in your will, or if you’d like to learn more about creating your legacy at Mac, please visit mymcmasterlegacy.ca.

An interdisciplinary program is holding a hack-a thon for change, trying to find innovative solutions for community challenges.