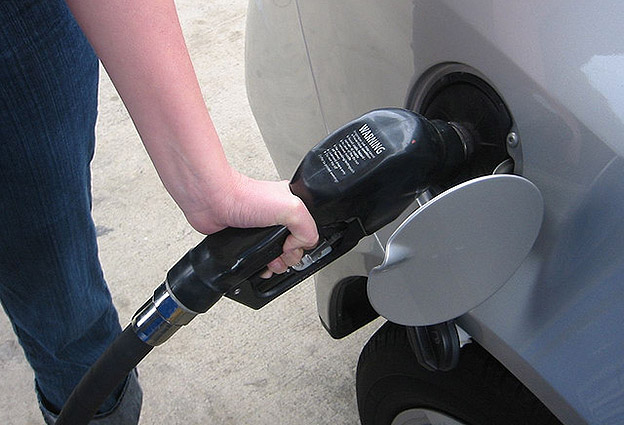 Pumping gas is a necessary task most motorists take for granted. For Sandi Mugford, who suffers from rheumatoid arthritis, filling up was a painful chore - until a group of first-year engineering students developed a tool to help with the task.

An active person who works two jobs and helps look after her mother, she needs to cover a lot of ground, which she does with impressive energy.

Mugford has lived more than 50 years with rheumatoid arthritis, having been diagnosed as a girl of 10.

Being able to drive is critical to her lifestyle, but filling her own gas tank was presenting a considerable obstacle, because arthritis had robbed so much of her dexterity and strength. Full-service stations are rare and not always open when she needs them.

The act of filling up involves dozens of movements that are second nature to most motorists. When the hands are not willing, however, each of them can turn into a painful exercise in endurance and frustration, from guiding a bank card into the tiny slot, through lifting the heavy fuel nozzle, dragging it to the car and squeezing the trigger for agonizing minutes as the fuel flows at last.

McMaster students and faculty members teamed up to see how they could make it easier for Mugford.

Robert Fleisig took 950 first-year Engineering students in his Engineering Profession and Practice course and broke them in to 199 teams, each tasked with creating a useful way of making Mugford’s fill-ups easier.

It’s a teaching model Fleisig first employed last year, when students designed an orthotic device for a patient with a broken arm.

It has proven to be a very valuable teaching tool, helping students learn more about collaboration and empathy as they work to resolve a significant engineering challenge, not knowing what the outcome would be.

“We wanted the students to tackle a real-world project, which means it had to be open-ended. I didn’t know what the answer was going to be, and I didn’t know how we were going to get to the answer,” Fleisig said.

The engineering students in turn collaborated with counterparts from Biology and Rehabilitation Science, who helped them learn more about the human body, and about the creation and use of assistive devices.

The collaboration was a good pilot project, said Lovaye Kajiura, whose first and fourth-year Biology students shared detailed knowledge of the mechanics of the arms and hands, and the ways that rheumatoid arthritis affects the body.

The project helped the biology students to develop their skills in communication, analysis and reflection while working on a project that had a particularly meaningful objective, she said.

“I think it’s a good idea for students to communicate with their counterparts from other areas,” Kajiura said. “The students were fabulous to one another. It was wonderful to see.”

Mugford herself spoke to the students, telling them about her life and specifically her challenges at the gas station, and answering questions through three lecture sessions.

“The students are so thoughtful,” she says. “I think it’s really wonderful that they have just embraced this project.”

The teams set to work on their projects, building and testing prototypes, even asking strangers to try them out at a gas bar near campus.

Brenda Vrkljan set up Dragon’s Den style critique panels where about 20 experts from her Occupational Therapy program offered constructive criticism that helped the engineering students refine their mechanical solutions to a human problem.

“That’s where our experience comes in – the person-environment fit,” Vrkljan says. “Having that opportunity to reach students in their first year is a huge opportunity. They were so open to the feedback.”

In the end, the team of Peter Do, Rosa Luo, Daniel Merlano, Saif-ur Rehman and Mackay Russell developed a simple, useful solution, using plastic pipes, electrical tape, wooden dowels and foam from the shelves of a local hardware store.

Calling their project “Pumped”, they created a lightweight lever that wedges perfectly into the trigger of the gas nozzle, allowing Mugford to pop it in and hold it in place with minimal effort.

“I’m really glad Mac has a project like this,” said Russell on behalf of his team. “It’s nice to be able to apply what you’re learning and help somebody in the community.”

Today, Mugford carries her fuel lever everywhere she drives. She insists she is not joking when she says the only way she will give up her new tool is if someone pries it from her “cold, dead hands.”

“I am so thankful for the opportunity to work with these students,” she says. “I don’t think they realize how much of a change that it has made in my life.”

The success of the year’s project confirms for Fleisig that he’ll use a similar approach in September, with a new client and a new problem.

“There’s no Googling the answer,” he jokes.