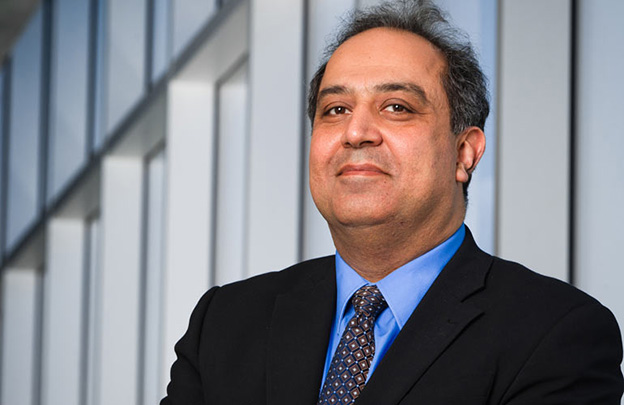 Sitting in a car stuck in traffic in Beijing, idling vehicles billowing out fuel emissions all around him, Saeid Habibi couldn’t help but think about his research.

Habibi and his McMaster team have devoted much of their time in recent years to looking at ways to improve the lifespan, reliability and development cost of electric cars and hybrids.

Developing countries like China, with its high pollution levels, drives home the need for electrified vehicles and the research required to improve them, says Habibi, a Mechanical Engineering Professor who serves as the Ford/NSERC Senior Industrial Research Chair in Fault Diagnosis.

“The pollution level is dangerously high and unbearable,” Habibi says of his visit to Beijing. “There’s a lot that needs to be done.”

Throughout his 28 year career, Habibi has strove to make machines – water distribution systems, planes, cars – work better. He’s a leader in the area of control-failure-prediction systems for the automotive and aerospace industries. Recently, his efforts earned him the distinction of being named an American Society of Mechanical Engineers (ASME) Fellow, a recognition of service to the organization and research accomplishments.

“He is a tremendous asset to the engineering profession and a leading innovator in the field of fault diagnosis.”

Notably, Habibi pioneered the ground-breaking smooth variable structure filter theory, which is a predictor-corrector model-based state estimation strategy that guarantees stability and allows extraction of a higher degree of information from measured signals through secondary indicators of performance.

Habibi and his students are using this signal-measuring and information-extracting theory and applying it to several areas, including condition monitoring and developing diagnostic tools for powertrain components such as electric motors, battery energy storage systems for electric and hybrid cars and internal combustion engines.

“We get this information and we extract measurements from them and we determine the condition and the health of those parts and identify fault conditions, track the changes that happen in the system, diagnosis it and locate it,” Habibi says.

“These are important things, especially in these emerging technologies.”

In technologies such as hybrid or electric cars, Habibi’s research will help better predict how long the vehicle can run before the battery needs to be recharged. Among his other projects, Habibi and his team are also working on technology that would monitor traffic in self-driving vehicles.