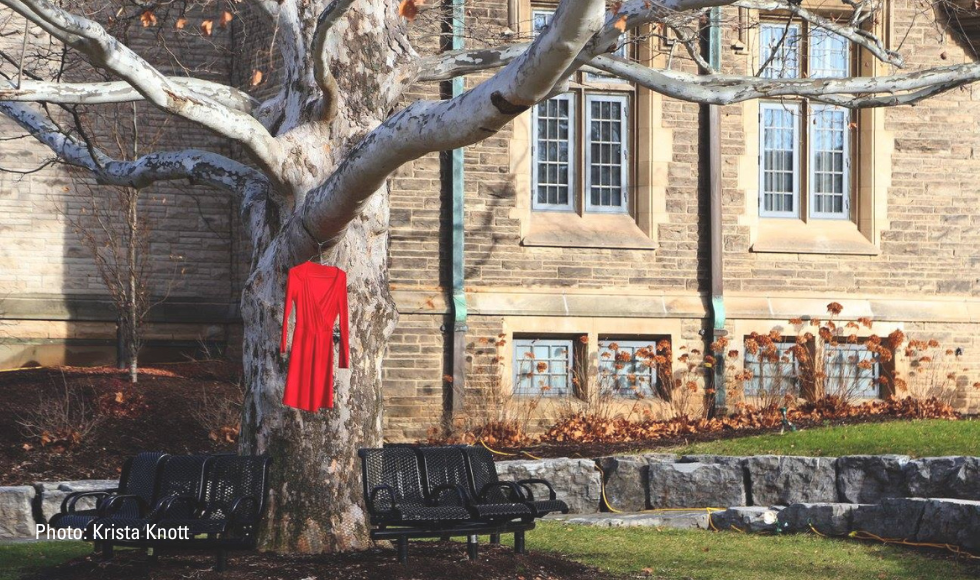 Dec. 6 is a day of mourning and remembrance for the victims of the 1989 Montreal massacre, the thousands of murdered and missing Indigenous women and girls, and members of the McMaster community and those around the world who have been harmed by gender-based violence.

Please note that the December 6 committee is cancelling the panel event scheduled for December 6, 2022 because of the strike.

The committee is postponing the Men’s Walk and the REDress Project until February 14, 2023. More information from the committee to follow in the new year.

Please check back on the Daily News website for an article on December 6 on the importance of this day of reflection and action.

Across Canada, Dec. 6 is observed as a day of mourning and remembrance of the victims of the 1989 Montreal massacre, when a gunman killed 14 women engineering students and staff at Polytechnique Montréal. It is also a day to commemorate the thousands of murdered and missing Indigenous women and girls, as well as members of the McMaster community and those around the world who have been harmed by gender-based violence.

Organized by volunteers across campus, including the Dec. 6 committee and the Equity and Inclusion Office, this event is an opportunity for self-identifying men on campus to reflect on their unique role in working to end gender-based violence.

This tour includes a walk around campus to five memorial sites. At each stop along the walk, one man takes a rose, places it at the memorial site, and shares a few words. It is a time to reflect on allyship and on the women and trans folks they have learned from in this work. Each stop is ended with a moment of silence.

Red dresses will be displayed across campus as part of the committee’s commemoration of the National Day of Remembrance and Action on Violence Against Women.

The REDress Project, an installation by Winnipeg-based artist Jaime Black, started in 2010. Originally placed in downtown Winnipeg, red dresses have since been displayed in installations across the country as a way of drawing attention to the ongoing crisis of Missing and Murdered Indigenous Women.

"Success in every profession, is to love what you do and try to make an improvement around you."