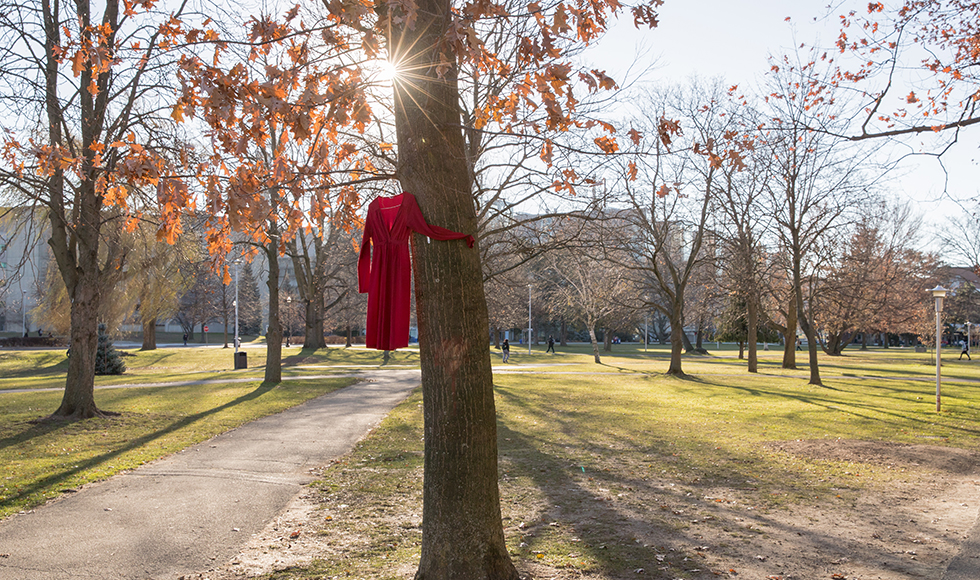 In previous years, red dresses have been placed at various locations around campus on Dec. 6 as part of the REDress Project, a national campaign to remember murdered and missing Indigenous women.

On the National Day of Remembrance and Action on Violence against Women, the Dec. 6 committee at McMaster is holding a virtual round table discussion exploring the impact of the pandemic on gender-based violence. Across Canada, Dec. 6 is observed as a day of mourning and remembrance of not only the victims of 1989 Montreal massacre, when a gunman killed 14 female engineering students at Ecole Polytechnique, but also the thousands of murdered and missing Indigenous women and girls, members of the McMaster community and those around the world who have been harmed by gender-based violence.

It is held every year for McMaster staff, faculty, and students as part of a larger set of programming for the National Day of Action and Remembrance on Violence Against Women, offering an opportunity for men on campus to reflect on their role in working to end gender-based violence.

Organizers invite men to take a walking tour around campus to four memorial sites. At each stop along the walk, one man takes a rose, places it at the memorial site, and shares a few words. Each stop ends with a moment of silence.

Rapid tests available to McMaster community ahead of reading week

COVID-19 rapid antigen test kits will be distributed near the Starbucks in the McMaster University Student Centre (MUSC) on Wednesday, October 5th from 9:00 a.m. to 4:00 p.m., or until supplies last.