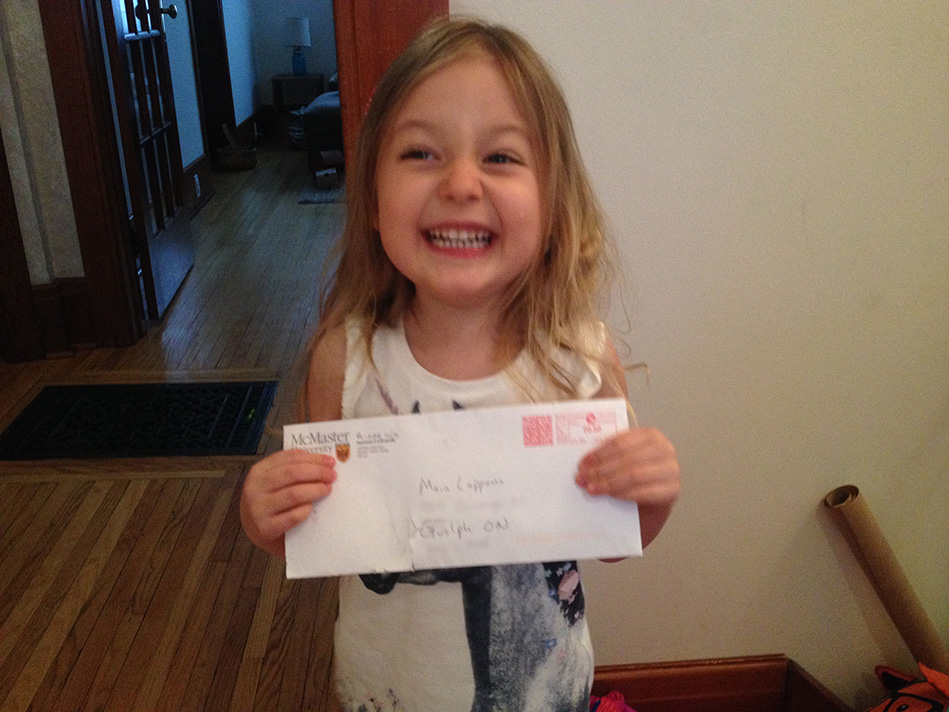 Four-year-old Maia Lappano awoke one recent Thursday morning close to tears when she realized something awful.

The little girl from Guelph may never see a real, live wooly mammoth.

This, according to her father Jon-Erik, led to a breakfast discussion on the Ice Age, changing climates, evolution and extinction.

“A lot to handle on a Thursday morning,” he says.

Distraught, Maia finally asked: “So, I’ll never, ever see one? Not ever?”

That’s when Jon-Erik remembered that there were some scientists down the road in Hamilton working with ancient DNA. “We talked about DNA and how maybe a baby mammoth could grow inside a mother elephant,” he says.

And with that, Maia was sold.

She insisted that she write to these scientists and tell them to do it – and soon.

And write she did – a colourful letter, addressed to “The Sientists,” which was short and to the point: “Please can you find a wooly mammoth egg and put it in an elephant?” And she made it pop with the addition of some stickers. With the help of her father, the letter ended up making its way to Henrik Poinar, Principal Investigator at McMaster’s Ancient DNA Lab.

In 2015, Poinar was part of an international team that mapped the mammoth’s genome, raising the possibility of bringing them back – although he says there are many ethical questions about bringing back extinct species.

Luckily for Maia, he’s also currently helping the Ontario Science Centre with an exhibition on the wooly mammoth – so he sent her passes to the museum – and to top it all off, he also sent her her very own piece of mammoth tusk.

The scientists (Hendrik & Debi Poinar) of @McMasterU wrote back, w/ gifts including passes to @OntScienceCtr & a piece of MAMMOTH TUSK

Needless to say, Maia was thrilled – and is perhaps on her way to becoming a “sientist” herself.